The somewhat renowned Happy Seven is the latest of Toronto’s Chinatown eateries to fall victim to the business-crippling combination of rodent infestations and cellphone cameras. 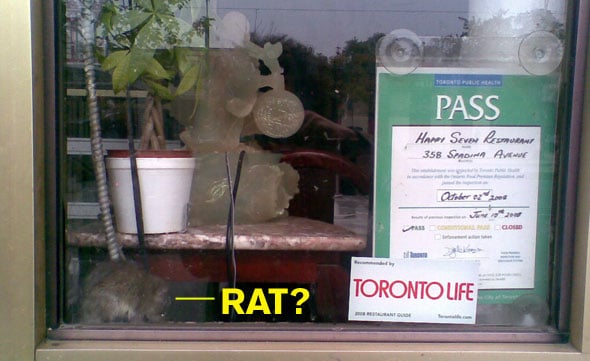 Now, we wouldn’t bet the farm on that being a rat. Or maybe we just don’t want to even think about it—look at the freaking size of that thing, whatever it is. We’ve seen smaller creatures on leashes. But, as the Star dutifully reports, the city’s health inspectors have shut the place down pending a full investigation. (The Board of Health is one Toronto outfit that works very well, we should add. We were once served a plate of Thai food with a cigarette butt in it—the proprietor suggested we’d planted it in order to obtain a free meal, which nearly led to fisticuffs—and they were on it within hours. And its online inspection database is extremely handy.) But there’s at least one Star reader who felt the story was written in a wholly inappropriate manner.

Thank you for covering THIS story and perpetuating negative stereotypes about Chinese people and their food. The stereotype of an unscrupulous business owner and a culture who eats cats and dogs is lurking behind this story, seemingly about poor health inspection. Why not find a story about a dirty fast food restaurant or an upscale French restaurant? I didn’t think vermin were that fussy. After seeing the way that multiculturalism was portrayed so well on the front cover of your morning edition (“Meet Your GTA Candidates”)this story really was a really unfortunate choice. Racist stereotypes run deeper than we realize I guess.

What do you think, Megapundit readers? Is “doit2julia” for real, or is he/she taking the piss?

FILED UNDER: Board of Health Chinatown Happy Seven rats Toronto