Between the Pundits: Humans vs. bears 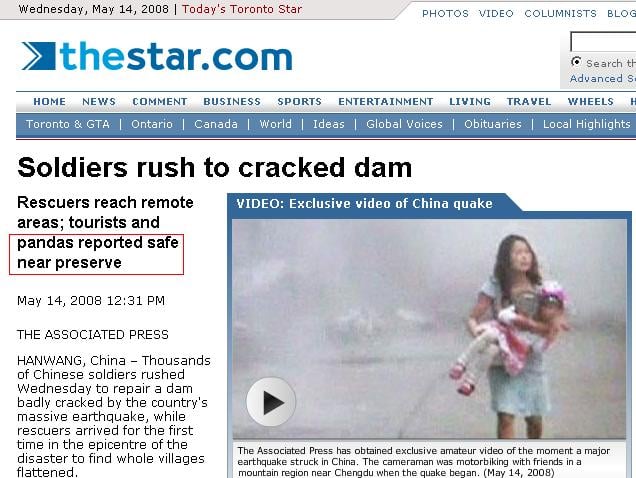 These aren’t just your average bears, of course:

Pandas are such a symbol of China that the loaning of them to other countries as peace offerings has been described as “panda politics.” And they are so rare and so slow to breed that any large-scale loss could be critical to the population.

And if we hadn’t just endured a national crisis over 500-or-so ducks who died in a northern Alberta tailings pond—”a casualty count that could be inflicted by just 62 hunters in a single day under Alberta duck-hunting limits,” by Don Martin’s math— we might not have given the news item pictured above another thought. Reporting the living-or-dead status of pandas in the same subheadline as the living-or-dead status of humans, beneath a headline portending a very wet and terrifying end to untold numbers of more humans, and next to compelling video footage of a town full of humans getting flattened, would just be …  you know, a news update. But in the wake of the Duck Shoah (© Colby Cosh), we feel it may be time for Canadian editors to reassert our dominance over the animal kingdom.

In the meantime, would it be malapropos to ask why an earthquake would be particularly likely to kill great numbers of pandas? Do they live in panda highrises?