Between the Pundits: So many questions 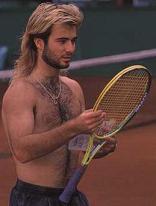 Jeepers, talk about burying the lede. Just when you’re about to lose interest in Dalton McGuinty’s scary flight from Los Angeles to Toronto, which ended safely in an emergency landing in Vegas, you get this:

Once McGuinty’s plane landed in Las Vegas, the premier posed for pictures with the crew before he was introduced to tennis great Andre Agassi in the Las Vegas airport lounge.

A staffer said the premier asked him about the school he founded for high-risk kids in Las Vegas.

Uh, yeah? And? Who introduced them? Which one recognized the other first? Is Agassi a permanent fixture in the lounge—say, like a casino greeter—or was he on his way from A to B? Come on CP, dig deeper! Inform, dammit!