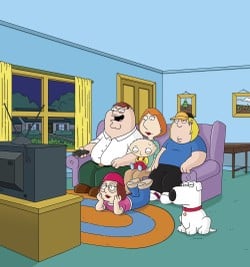 In the money: Google’s stock price may not have hit anywhere near the $1,000 a share many analysts were predicting last year. (In fact, it’s been slogging along in the $550 range). But the company is still dreaming up ways to try and boost its online ad revenue. The latest is a deal with Seth MacFarlane, creator of  the television cartoon The Family Guy.  MacFarlane, the New York Times reports, is working on an Internet animation series (called “Seth MacFarlane’s Cavalcade of Cartoon Comedy”) that will appear on thousands of web sites using Google’s advertising system, AdSense. The short, two-minute episodes will appear with ads, facilitated by Google, attached to the beginning, or somehow worked into the videos. Google seems intent on setting up its own little online television network, not just selling ads but distributing the content.  “We feel that we have recreated the mass media,” Google tells the Times. Unlikely. But Google, to its credit, continues to defy its critics by luring ad dollars that once would have gone to television over to the Internet.

Trading down: Don’t mess with French fashion. A French court ruled that the online auction site eBay, must pay $61 million to LVMH, a company that makes perfumes and luxury fashion goods. LVMH argued that eBay hasn’t done enough to stamp out the sale of cheap, designer knock-off goods (90 percent of Louis Vuitton bags and Dior perfumes sold on the site are fakes, it argued). This isn’t the beginning or end of eBay’s legal troubles.  Hermes International successfully sued the company in June. Tiffany & Co has also sued.  eBay is appealing the LVMH decision.

Number cruncher: The $35-billion BCE takeover fracas continues. And it may not be resolved until the end of the year, the Globe and Mail reports today. With the legal issues seemingly put to bed, the issue now is the $42.75 a share purchase price.  The banks that are financing the deal think the number should be as low as $35 a share, according to the Globe.  That’s a big difference from the number the BCE board has settled on.

Boom or gloom: Surprise, surprise. Statistics Canada reports today that the nation’s GDP actually grew slightly in April, following declines in February and March. So, that was a short lived recession. But with an increase of just 0.4 per cent, we’re inclined to say this is still a bit more gloom than it is boom.

Ticker tape: We’re transfixed with the price of oil, which moved past $143 a barrel this morning. Where will it stop; nobody knows!  Also on the rise: demand for the new Apple iPhone. An RBC report says it’s unprecedented.