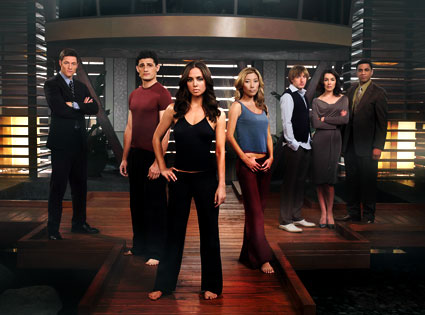 In the money: Or at least that’s what Fox is hoping for this fall with its new strategy of shrinking commercial break time on two new shows—Joss Whedon’s Dollhouse (pic, left) and Fringe by J.J. Abrams. In an effort to keep viewers from flipping, the dramas will run 50 minutes long, instead of the standard 42 to 44 minutes. Reportedly, Fox will charge a premium on the remaining ad minutes to make up the difference. There is, however, one tiny problem with this plan: it does nothing to combat the millions of us out there with PVRs and TIVOs who simply fast-forward through all the ads.

Trading down: Wachovia Corp.’s new CEO Robert Steel promised Thursday, his first full day at the office, to “execute like crazy” in an attempt to turnaround the U.S.’s fourth-largest bank, which lost between US$2.6 and $2.8 billion in the second quarter. But his words weren’t enough to alleviate fear among investors that change won’t come quick enough and the share price sunk at one point during the day to a 17-year low. Today hasn’t been any better as the stock tumbled another 7.7 per cent from yesterday’s close in early morning trading. Then again, it’s not as bad as what’s happening to Fannie and Freddie.

Number cruncher: The StatsCan employment numbers for June are out and while the overall picture isn’t that pretty—5,000 fewer jobs last month pushed the unemployment rate up a touch to 6.2 per cent—there is some good news. There were 37,000 more 17 to 19 year olds working this June compared to last, which could translate into fewer college and university-bound kids looking to their parents for book and beer money come fall. No guarantees, of course.

Boom or gloom: Should we be concerned that 53 leading economists are so perfectly split over what the focus of the Federal Reserve should be?

Ticker tape: Starting today, the Chinese government begins its crackdown on all non-official Olympic sponsors. Hey Nike, that includes you. And for the three people out there who missed this, Apple just released a new product.