Biz fix: Will NRDC inject the Bay with some style? 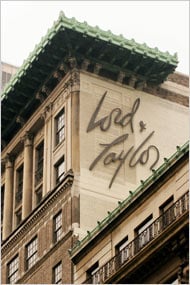 In the money: NRDC Equity Partners, owner of the upscale American Lord & Taylor department store chain, finally achieved its goal of buying HBC. As a consumer I’m thrilled (in a guilty kind of way), mainly at the prospect of seeing my dowdy local Bay store get a facelift and start offering clothing brands I want to buy. I even like their pick for CEO. Today it was announced that Jeffrey Sherman, former president and COO of the Polo Retail Group, is the Bay’s new top gun. With experience overseeing the Polo stores internationally and looking after Club Monaco for a while, he might be able to inject the Bay with a little style.

Trading down: Yet another automotive plant is laying off workers. This time it’s Sterling Trucks, in St. Thomas, Ont., which just axed 720 people. I have a nasty feeling we’re going to be reading news stories like that for a while…

Number cruncher: Royal LePage Real Estate Services predicts that the price of a Canadian house will “rise only modestly” this year, meaning by 3.5 per cent. Meanwhile, the Bank of Canada is predicting an inflation rate of 4 per cent by year end. That means after inflation, housing prices may actually be going down.

Boom or gloom: The price of oil is tumbling (though still astronomically high). Is that good for Canada or bad?

Ticker tape: A new trade accord will allow doctors, nurses and others to work in any province, no matter where they live (Ontario, kiss your doctors goodbye, they’re heading west)… and CTV has a surprise hit, called Flashpoint