Black bears at the dump, and the missing Trans-Canada link

NOW:  (Wawa) This town is famous for its giant goose, but there are actually three: the original steel and concrete statue didn’t weather well after it was installed beside the highway in 1960; it was replaced three years later by the current, much lighter iron goose that is also now showing its age. And there’s a smaller goose on the roof of the Wawa Motor Inn. 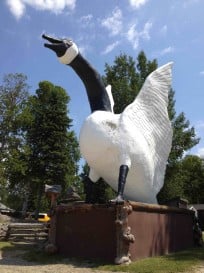 The goose was intended to draw attention to the community, which is bypassed by the Trans-Canada, lying two kilometres east of the highway. It was criticized as “pregnant” and foolish, but succeeded admirably.

That original 9-metre-tall goose was moved to a couple of other locations before it was bought in 2000 by Anita Young for her General Store in town. After careful restoration, two forklifts drove it carefully up the road to her property, one driving backwards, the other forwards, balancing the 70-tonne goose carefully between their tines. “It’s a piece of our history – I couldn’t just let it go,” she says.

Both giant geese still pull in the tourists. They’re advertised on roadside billboards for literally hundreds of kilometres – I saw one sign for Wawa outside Mattawa on the TCH, 722 kilometres east of here.

THEN: (Wawa) The 100-km stretch of highway south of here to Montreal River was one of the final pieces of road to be completed on the Trans-Canada Highway, not finished until 1960. Before then, motorists had to drive the much more northern route through Kapuskasing if they wanted to stay in Canada on the road west or, more likely, head through the States. 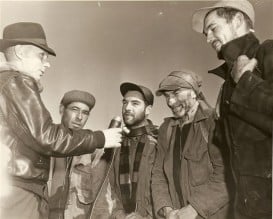 Edward Nyman, centre, speaks for the four trekkers in Sault Ste.-Marie in 1951.

There was a road built during the Depression from Sault Ste.Marie north, but it stopped at Montreal River; politicians kept promising to complete it if elected, but never did. Wawa relied on the railway for its connection to the outside world, So in 1951, local merchants organized “Operation Michipicoten” to draw attention to their plight; the merchants were headed by Al Turcott, who later dreamed up the Wawa Goose. Four men walked the hundred kilometres through the bush to Montreal River to prove that if they could do it, surely a road could be built. The trek took about 10 days.

One of those men was Edward Nyman, who I met today at the Seniors’ Drop Inn Centre. He remembered the long walk very well.

“I was only 17 or so, and Mr. Turcott talked me into it. He was a great bull-shitter. We had a radio and supplies were dropped in by a plane, but it really wasn’t difficult. We could have done it much more quickly, but Turcott wanted the publicity so we took our time and went slowly. 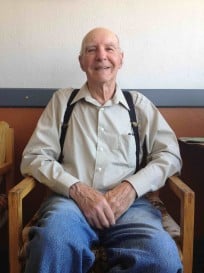 “We didn’t have a tent, or a tarp – just sleeping bags. It was September, so there were no bugs, but they wouldn’t have bothered us anyway. We were used to the bush.”

Once again, all the politicians at the group’s reception dinner agreed to build a road if elected, though it took nine more years before the highway was eventually completed.

Is the town better for the road? Edward’s not so sure.

“We used to more or less trust anybody. Nobody had locks on their doors,” he said. “These days, everybody has locks.”

That’s progress for you. He reminded me of Lloyd Adams in Newfoundland, who surveyed the highway through the bush in the 1950s. ““Now we have a four-lane highway and it only takes 45 minutes to get to Wal-Mart,” Lloyd told me then. “I guess that’s progress.”

At Jim’s barber shop, where we had our hair cut, the talk was about the black bear that was chased off the roof of the Canadian Tire store earlier this week. Bears are more of a nuisance here than ever before, and many locals blame the provincial government’s cancellation of the spring bear hunt.

They also resent that neither the Ministry of Natural Resources nor the OPP will come and deal with any bear that’s rooting through garbage. One guy waiting for a haircut said he had to chase away a 400 lb. bear from his neighbour’s porch this week with a slingshot and one of his young daughter’s marbles. 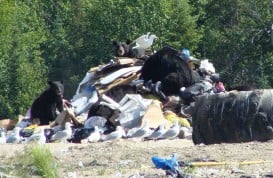 Bears at the dump

“The dump’s the worst place for bears,” said Jim. “I was told there were 16 there earlier today. We’ve run out of space for our garbage so we just pile it on top of the old garbage and it gets higher and higher, and the bears come and help themselves.”

Tristan’s ears pricked up beneath the scissors and he looked at me imploringly. The 12-year-old in me felt the same way. “Where’s the dump?” I asked.

It was closed and empty when we arrived a half-hour later – well, empty of humans anyway. There were at least five large black bears and a flock of birds rooting through a fresh pile of garbage about 100 metres away on the other side of the closed, flimsy gate.

I may not have seen any moose in Newfoundland (though I came close here), but these bears made up for it. Now there’s a tourist idea for Wawa. If people will travel all the way to Moosonee to see polar bears at the dump, surely they’ll drive three kilometres off the Trans-Canada to see black bears. Except then they’ll get a bit too close, and next thing you know …

SOMETHING FROM TRISTAN, 12: (Wawa)

Tonight we are in Wawa, Ontario. Today we did a lot of things including going to the beach and the water was fabulous! It reminded me of pictures of exotic places like Australia and Hawaii. The water was so clear and the sun was just the right brightness so that it glimmered off the water without blinding you. 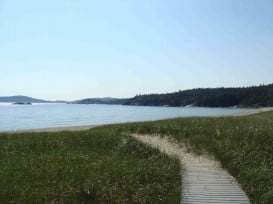 Every thing was going perfectly until what looked to be a deer fly started to chase us everywhere. It was obviously very well trained because it knew all the spots we couldn’t feel and it could get in and out very quickly.

But overall today was a good day – the weather was great, the people were nice and everything just went perfectly. Tomorrow we hit Marathon!