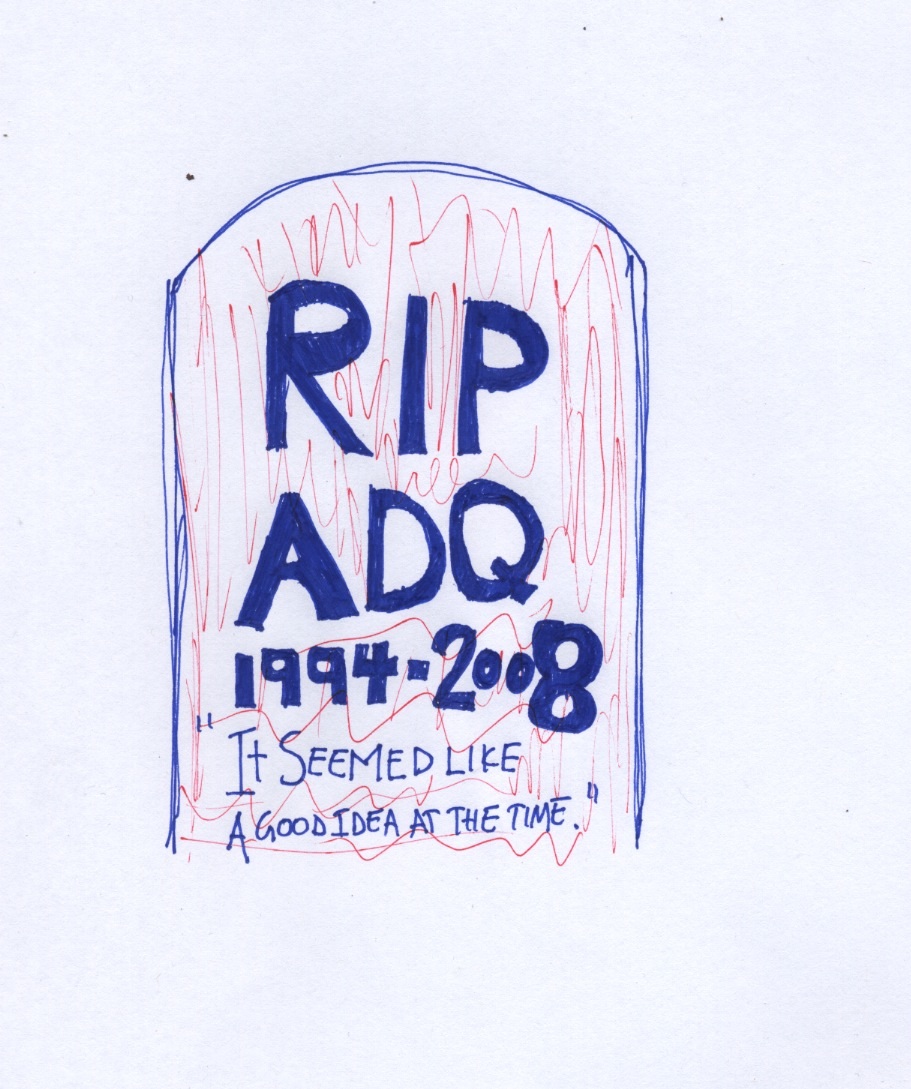 The main story emerging from this non-story of an election in Quebec is the complete, total, utter, out-and-out, unmitigated and unqualified collapse of the Action Democratique de Québec. It has been something to behold, this slow motion car crash. Why, it was just last year that Mario Dumont&Co. took Quebec by storm, punting aside the moribund Péquistes and coming within a hair of governing the freakin’ province. Mario, Super Mario, had it all: he was a telegenic leader unburdened by gray hair (dear old Charest) or cocaine (poor, poor André). His party didn’t rest solely on the tired federalist/sovereignist axis, and it gave the province’s English an alternative to the Liberal Party of Quebec–which, the somewhat more hysterical Anglos among us have argued, has taken têtes carrés for granted.

Not to dance on anyone’s grave, particularly when the person has yet to be buried, but we’d be remiss if we didn’t reflect on the certain death of the ADQ and, come election day, the return of Quebec to its rightful status: that of a bitchy, conflicted two-party province that is constantly at war with itself. Yippee!

A look at the numbers. HKDP Communications gives enlightening predictions based on the four major polls conducted so far. They are wildly divergent when it comes to the the makeup of the next government; the Léger polls, here and here, at first have Charest marooned deep in minority territory and, later, skimping into a majority, while CROP at first has him on the cusp of, then well within majority status.

Grain of salt, and all that. What’s interesting about these polls is the consistency of ADQ’s numbers: regardless of who is asking the questions, HKDP has the party losing between 85 and 95 percent of its seats come December 8. In other words, the ADQ is dead; the Liberals and Péquistes are just fighting over the carcass.

Coincidentally or not, Dumont himself yesterday switched from his stubborn all-is-well, polls-are-nonsense, the-real-test-is-on-election-day spiel to offering a full-on apology for his botched performance over the last 18 months. Reflecting on his disastrous tenure, Mario went so far as to beg for a second chance. (His money quote: “[R]eal change … is not like buying a lottery ticket, where if you don’t win, you throw it in the garbage.”) He has also taken to invoking Barack Obama’s ‘Yes, we can’ business and, in what is surely a bit of unintended irony, once again blamed immigrants for the slow death of Christmas and Easter in Quebec.

Last night, a rather delightful Jacques Parizeau was on Tout le Monde en Parle. Hirsute host Guy A. Lepage asked the former premier to describe Dumont in one word. Parizeau couldn’t quite. “Intelligent,” he said, before adding, “Came into the job he has now much too soon.”

To be fair, Mario couldn’t help it; the voters compelled him to such heights so quickly. One wonders what, if anything, is going to cushion his fall.