Athletic and full of energy, Turner ran a booming contracting business before an email about extreme poverty changed his life 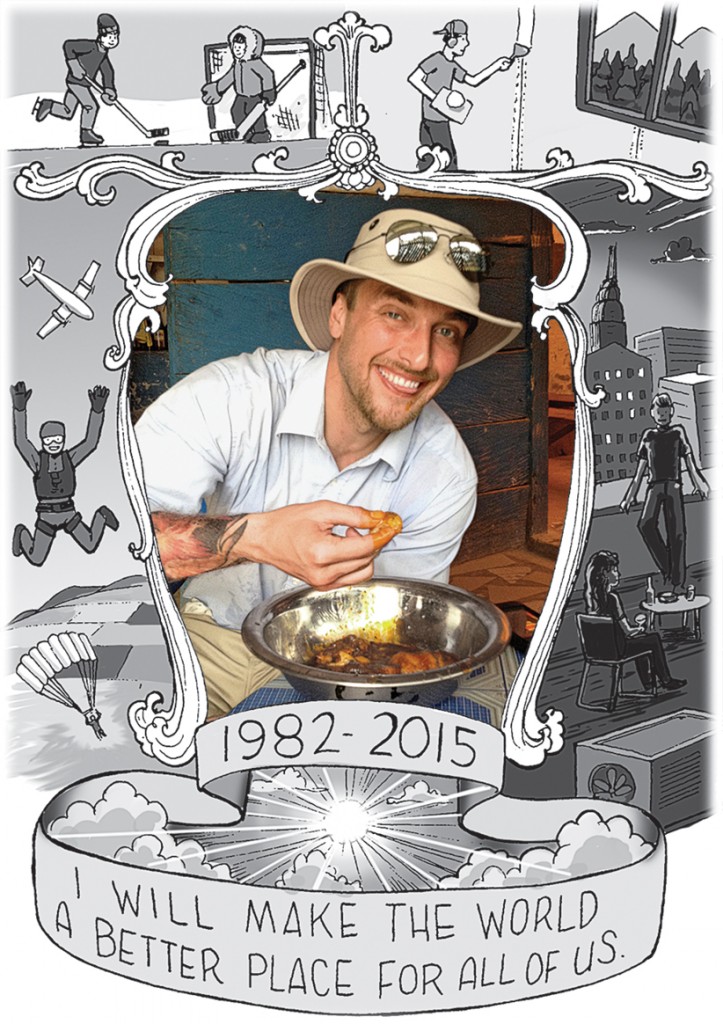 Bryan Swick Turner was born in Winnipeg on Sept. 14, 1982, to Michael, an aquatic ecologist, and Alison, a nurse. A sister, Evelyn, came three years later. Much of the family’s early time was spent at the Experimental Lakes Area near Kenora, Ont., where Michael worked. As a boy, says his father, Bryan “was enthusiastic . . . full of energy and purpose.” He mountain-biked, played lacrosse, took kick-boxing and played AA-Hockey. “He was also a voracious reader at a young age,” recalls his mother.

In Winnipeg, the family lived in a small, 800-sq.-foot home. “But it had a big backyard,” says Alison. Each winter, the Turners built a backyard rink, complete with floodlights. Bryan, “a hockey nut,” often practised alone or with Evelyn before school. Around age 13, the family learned that Bryan had been abused by someone. The experience threw him into a dark period lasting until his early 20s. It was, says his father, “like a light switch had been turned off.” His grades fell. He struggled with everything. Music kept him going: He was also a talented guitarist and singer.

Bryan took up skydiving at age 18, completing his first jump in Steinbach, Man. “Bryan was very cautious,” says Michael, ﬁrmly against the idea. Skydiving “wasn’t about risk-taking for him. It was about risk avoidance, about Bryan learning about himself.” Soon after that first jump, he moved to Victoria. Leaving Winnipeg put a spark back into him. He started a successful contracting company, Sky’s the Limit drywalling, which operated in Whistler, Pemberton and Kelowna, B.C.

One day, Bryan’s aunt Patricia, a social worker, sent him an email with statistics about global poverty: how 50,000 people a day were dying around the world from poverty-related causes. “I know, once Bryan’s eyes were opened to that, he never looked back,” says Evelyn. Bryan had an extensive collection of audiobooks on poverty and sustainable development he called the “University of Bryan.” Listening at triple speed, he packed 300 audiobooks a year into his retentive brain as he drywalled. He had a tattoo on his arm that read: “I will make this world a better place for all of us.”

In 2007, he applied to Carleton University in Ottawa. Because of low high school grades, he was rejected as a full-time student, so he took part-time classes. The next year, Carleton accepted him. While studying human rights, Bryan founded STEEP (Students to End Extreme Poverty) in 2008. He and his team of 20 volunteers, including close friend Zahra Aldünia, convinced students to vote overwhelmingly in favour in a referendum to impose a $6 annual levy on student fees. The levy has so far raised nearly $600,000 for the Millennium Villages Project, whose aim is to reduce poverty in Africa. Bryan, says Aldünia, was tough and serious when it came to defending the poor. “But if you told him a sad story, or that you were having a bad day, he would immediately get teary-eyed. He believed everyone should have 12 hugs a day.”

After Carleton, Bryan attended Columbia University in New York, graduating in 2013 with a master’s of public administration in development practice. On his 30th birthday, he was invited by a mutual friend for dinner at Katherine Rodrigues’s apartment. A year behind him in the same Columbia program, Katherine shared his passion for fighting poverty. They talked on the roof for hours. “I just thought, ‘Wow, what an incredible human being.’ He soon convinced me I needed to pursue a lifelong journey of happiness with him.”

Last September, Bryan was hired as executive director of Ethical Systems, an organization that helps companies improve their business ethics. As he had since leaving home at 18, he continued to send his family video clips showing snippets of his daily life: surrounded by children in a Ghanaian village one day, dancing in his New York office another. He had also taken up the extreme sport of BASE jumping (an acronym for parachuting off buildings and other tall structures, both manmade and natural). In a letter to friends and family, he stressed he would do it as safely as possible. “If I die BASE jumping,” he wrote, “don’t waste time being upset about my dying; be upset about the seven million kids who die every year.”

On March 9, Bryan launched off the Perrine Bridge over the Snake River Canyon near Twin Falls, Idaho. His parachute failed to open and he hit the river 148 m below. He was 32.