By the numbers: How the PQ can win the election

With all the anti-sovereignist backlash floating around these days, wouldn’t it be a kick in the pants if the Parti Québécois won next Tuesday’s Monday’s election?

Before all this prorogation nonsense got going, it seemed like a foregone conclusion Jean Charest would win a majority. And despite the anti-sovereignist frenzy that’s been whipped up in Ottawa lately, it still looks that way today. As my fellow maudit anglais pointed out last night, the latest poll has Pauline Marois running 13 points behind Jean Charest with just a weekend to go before the election.

So, what has to happen on Monday for the PQ to prevent a Charest majority or win government for themselves? First, the ADQ’s support has to completely collapse, which it’s safe to assume will happen. Second, a hefty majority of those disaffected ADQ votes have to go to the PQ, which is where things get dicey.

Still, it is possible. 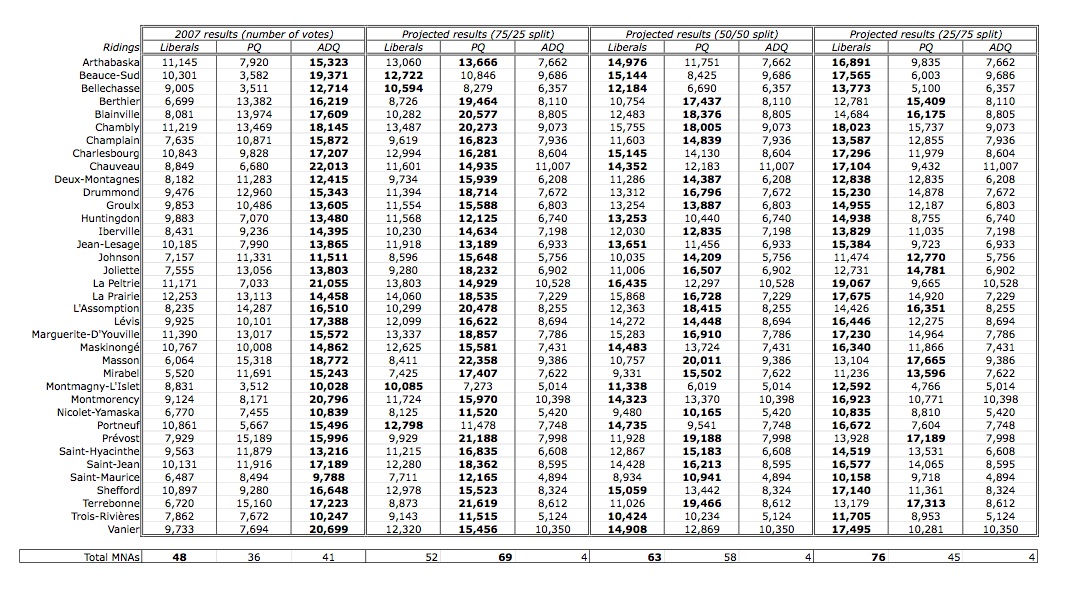 The table above (click to enlarge it) shows data from from the 37 ridings where an ADQ candidate defeated an incumbent from another party in 2007. Given the dire straits the ADQ is in, let’s assume all 37 are in play and that Super Mario’s party is only safe in the 4 seats it already had from 2003. Let’s also assume that both the Liberals and the PQ will keep all their seats from 2007—if you were willing to vote for Charest or Boisclair back then, there’s little incentive to change your party affiliation this time around.

The latest poll numbers show the ADQ hovering around 15 per cent support, which is a roughly 50 per cent drop from 2007, so let’s cut the number of votes the ADQ got in each of those ridings in half. If we shift 75 per cent of those former ADQ votes to the PQ, Marois’s party would win 33 extra seats, giving her a comfortable 69-seat majority. Should be simple, right?

Compared to Marois’s, Charest’s job is much easier. All he has to do is convince half the dissatisfied ADQ voters to cast their ballot for him. If that happens, he squeaks into office with 63 seats and a razor-thin majority. If, however, he manages, to get three-quarters of them to vote Liberal, he ends up with 76 seats to the PQ’s 45—the exact same result as in 2003.