The inside story of their childhood dream come true 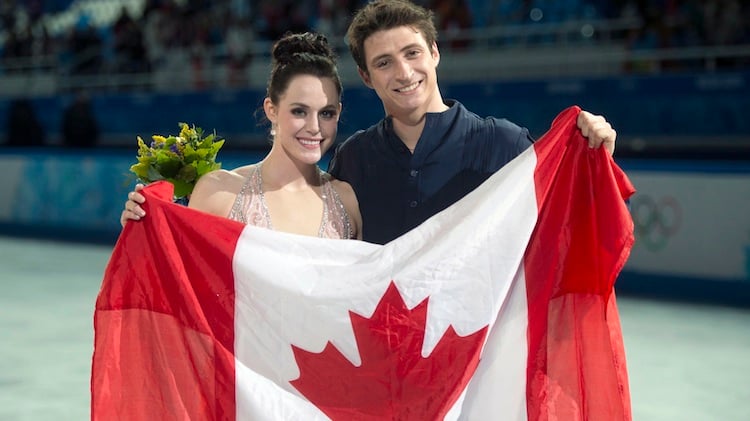 You’d never know it, considering the chemistry between Tessa Virtue and Scott Moir as they skated to gold this week, but a little over a year ago, Moir was training alone—using a hockey stick and a sandbag as a stand-in for his partner. Back then, Virtue could “barely walk,” says Lynn Lee, a close friend of the Moirs. Virtue, 20, and Moir, 22, missed most of the 2008-2009 season while she recuperated from surgery to both of her legs. Doctors had told them that “nobody recovers the same from this surgery,” Moir told Maclean’s. “And for the longest time before that they didn’t even know what was wrong with her.”

Yes, it’s been quite the ride for Canada’s golden duo, the youngest ice dance gold medallists in history, and the first North Americans to win the event in its 30-year Olympic history. It makes their victory, following a near-flawless skate on Monday, even more remarkable. “Last year was very tough,” says their coach and choreographer, Igor Shpilband. In October 2008, Virtue went under the knife to relieve pain in her shins, the result of chronic exertional compartment syndrome (each of her calves still bears four circular scars from the surgery). Her coaches, who held weekly conference calls with her doctor and physiotherapist, had to be careful not to push too hard.

Virtue and Moir’s return to the competitive circuit began in Vancouver, a year ago this month, at the Four Continents Figure Skating Championships at the Pacific Coliseum, the Olympic figure skating venue. As painful as that event was for Virtue—who was hustled to the medic for treatment after every skate—it was a triumph for the pair. They took silver. And in every competition since, they’ve gotten better, says Skate Canada CEO William Thompson. “I’m blown away by what they’ve done. Not only did they return; they’re stronger than ever.”

The pair started skating together 13 years ago, when Virtue was seven, and Moir, nine—a remarkable run for the sport, where partnerships are forever being made and unmade by coaches on the hunt for the perfect pairing. Moir, the son of a chemical plant employee and a figure skating coach, grew up in a house backing onto the local rink—a squat blue building on the town’s main strip—in tiny Ilderton, just north of London, Ont. Moir’s mom Alma and her twin sister Carol both skated competitively, then later coached; his older brothers Danny and Charlie also competed. “I never coached my own boys,” says Alma, chuckling. “My sister did. I coached her daughters—that was our trade-off.”

It was Carol who first thought of pairing Virtue, from nearby London, with Moir. Like Moir, Virtue was a small, graceful child, says Carol, which made her an ideal partner for her nephew, whom she calls “a bit of a ham.” Even so, for the first year, the two young athletes barely spoke. “They were just shy,” says Virtue’s dad Jim, a London lawyer (Virtue says she was hiding a bit of a crush).

On the ice, though, their talent couldn’t be contained. Carol recalls how at one of their first major competitions, in Kelowna, B.C., the two youngsters took to the ice to practice. “They were maybe 10 and 12 years old, or younger,” she says. “And when it was their turn, all the skaters and coaches sat back and just watched them.” Carol, who’d long since realized she had something special on her hands, had turned them over to Paul MacIntosh and Suzanne Killing of the Kitchener-Waterloo Skating Club. The close-knit Moirs and Virtues, who Carol says share a “big, farming family bond,” split the gruelling driving duties to Kitchener; they’d get up at 4 a.m. so the two could be on the rink by 6:30 a.m. The kids would climb into the back of the car, and fall asleep immediately, says Jim. “They had it down pat—just as we turned the last corner they’d wake up,” adds Alma. By then, they’d become best friends “without knowing it,” says Jim, and would get rattled when the other was hurt, or away.

Moir’s a natural athlete who loves to perform, says Carol. “He’s the youngest of three, so he had to work for the attention,” she adds. He was also a dynamic dancer at a young age—“rare for boys,” says MacIntosh. Virtue had grace from years of dancing (in fact, she turned down a spot with the National Ballet of Canada to focus on skating). They were the cute kids, the crowd favourites—so small that Virtue could lift Moir during performances, says Ryan Pyette, a reporter with the London Free Press who’s been covering them since they were kids. By the time they were teenagers, the pair were packing 9,000 fans into the London rink—“like Gretzky,” says Pyette.

Like young hockey stars, they left home early—at 13 and 15—moving in with billets in Kitchener. That way, they could skate from 6 to 10 a.m., and make it to school for second period. Admittedly, it was tough—both for the kids and their families. But Virtue and Moir considered it a necessary career move. Virtue even skipped Grade 8 so she could enrol at Bluevale Collegiate with Moir.
By then, they’d come to know each other with the intimacy of twins. “Their hearts beat at the same time,” says MacIntosh. “They sense each other’s every move.” On the ice, one can tell what the other is thinking with a squeeze of the hand, or the look of an eye. 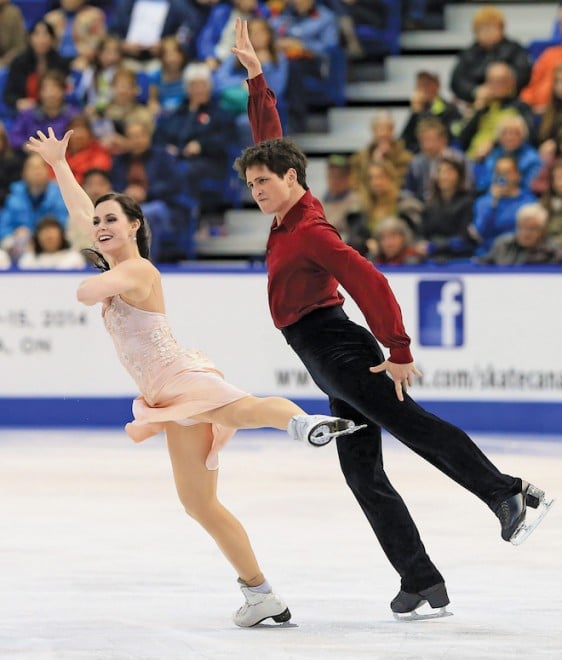 Eventually, they outgrew MacIntosh—and Canada—and sought the help of Russian coaches Marina Zoueva and Igor Shpilband, world leaders in ice dance who’d put out their shingle in the Detroit suburb of Canton. “We knew they had to do something to compete internationally with the European skaters,” says Alma. “You have to play their game.” Zoueva saw they had talent but could tell that they needed help on their lifts, so she put them to work with gymnasts and acrobats from Cirque du Soleil. Next, she set to work “growing” the incredible chemistry between them. Their “soul-to-soul” skating, she says, is reminiscent of the legendary Soviet pair Ekaterina Gordeeva and Sergei Grinkov, whom she once coached.

It was the pair’s chemistry that caught the world’s eye—“a trust, and connection that you can’t buy,” legendary ice dancer Victor Kraatz told Maclean’s. “They just connect with each other—connect with the music,” said Shpilband. “It’s magic.” Their stirring passion is in fact feigned. Believe it or not, the duo is not romantically involved (there are reports they once dated, but it threw them off their game); Moir is reportedly dating another member of the Canadian figure skating team.

They’re also famous for feeding off the crowd: “they love to perform, they love a rowdy audience,” says Alma. You could almost see them soak up the energy of the home audience in Vancouver—Scott in particular. Before taking his opening pose with Virtue, he skated round the rink alone, his arms open, his lids half-shut, seemingly absorbing the thumping energy of 11,000 fans. By then, Shpilband later told Maclean’s, he knew the gold was theirs.

He was right. The duo danced sweetly, flawlessly to Gustav Mahler’s Symphony No. 5, earning huge marks for their intricate spins and high-risk lifts—flawlessly executing their signature move, “the goose,” in which Moir crouches down while Virtue puts a skate on his thigh, balancing on one leg and extending her arms like wings before flipping onto her back to be caught by Moir and placed gently on the ice. They wanted to call it the eagle, but figured it was “too American.” It helped earn them Canada’s first figure skating gold medal of the Vancouver Games, ahead of Americans Charlie White and Meryl Davis, their best friends, with whom they share coaches and a training rink.

Back in Ilderton, the local community centre was packed with more than 300 people. Family members were out in full force: with 11 aunts and uncles in the community on Scott’s father’s side alone, “you better watch who you’re talking to in Ilderton, ’cause chances are they’re a Moir,” chuckles Jim Maguire, the manager of parks and facility services for the municipality. Watching the competition on three big-screen TVs, the crowd—most of them sporting long-sleeved red shirts emblazoned with the couple’s names—“never stopped cheering,” Maguire says. When they won the gold, everybody went wild. The Moir family took off in a parade of cars, honking their horns, and passed along streets festooned with ribbons and signs proclaiming their support for the local heroes. Carol didn’t get to bed till 5:30 a.m. “That’s the Moir family for you,” she laughs.

In Vancouver, just hours later, the duo entered Il Giardino to thunderous applause. The posh downtown restaurant was packed with their family—including nine Virtues and seven Moirs—and friends, including skaters Jeff Buttle, Jessica Dubé and Bryce Davison. They were met with champagne. A waiter broke out an operatic O Canada. “To see Scott and Tessa up there, knowing all the hard work they put into it—I was so proud,” said Charlie, Scott’s look-alike older brother, a firefighter-in-training. It was their childhood dream, Alma adds; “they’ve given up so much to get here.”

Virtue, her hair still up in a bun, was wearing black tights, flats and a red dress. Moir was in a down-filled Canada vest. Both, of course, wore their medals proudly on their chests. Moir spoke for them both, as he generally does, thanking their friends, family and coaches, before finishing up, of course, with a wink for Virtue.