Canada's Team... for at least one more game 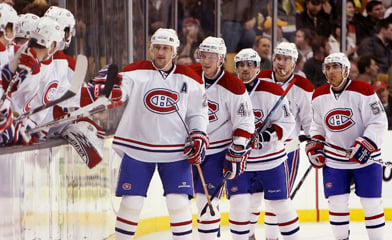 According to a recent poll, Les Glorieux have replaced The Toronto Always Leaves (Before The Playoffs) as ‘Canada’s Team’. I’m not all that surprised. Canada, ahem, teems with ex-pat Montrealers whose allegiances stayed with the team even after they left. Also, everyone loves an underdog, and when a team ends up first in the Eastern Conference after dire predictions of a basement  finish (thanks, Hockey News) it makes those bloody flappy car flags seem a little less absurd.

We also loves us some bandwagons, and that sound you hear is the thunder of about a million of them ponying up to Hockey Night In Canada to watch Guy Carbonneau valiantly dig himself out of a 3-1 hole against the Flyers (I believe, unlike these idiots.) As eternal Leaves Nation flogger ‘Godd Till’ (a pseudonym, to save himself the embarrassment), who toils away at the beautifully bitchy Coxbloc, mentioned the other day: “I wonder what the results will be… what with everyone breaking their legs jumping off the bandwagon.”