May's baby book idea, no cookie time for this Martha, and the MP who loves Valentine's Day 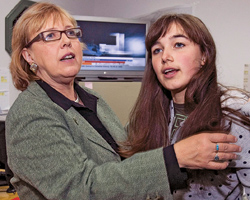 May’s baby book idea
Since becoming leader of the Green party, Elizabeth May has written two books, Losing Confidence: Power, Politics, and the Crisis in Canadian Democracy, and Global Warming for Dummies (which she co-authored with Zoë Caron). Now she is trying to pitch some other ideas to her publisher. There is some interest in a book on Alberta’s oil sands and the need for a national energy strategy. But the book she would really love to write is about motherhood and “how to incorporate children into your life without having to use child care.” May started bringing her daughter, Victoria Cate, to work 14 days after she was born. At the time, she was the executive director of the environmental group Sierra Club Canada and says the office was already baby-friendly before her daughter was born. When she met with Prince Charles on the Royal Yacht Britannia she said he was thrilled to see her baby. That had to be cleared through protocol, though, because, says May, no one before had ever had a meeting with the prince and brought along their baby. When Victoria Cate was two, she was brought to the Oval Office when May met then-president Bill Clinton. If she writes the book, May would like to call it Have Baby, Will Travel. So far she has been told the idea “would make a great article.” 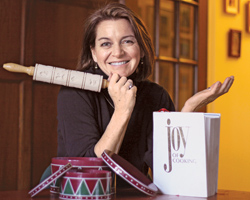 No cookie time for this Martha
Over the holidays Liberal MP Martha Hall Findlay travelled with her special rolling pin. Each holiday season she tries to make springerle cookies, which require her carved rolling pin to create impressions on the treats. She uses a recipe found in Joy of Cooking. She had hoped to make them while she was home in Toronto but got too busy, so she brought the rolling pin along when she visited family in Banff, Alta., and Revelstoke, B.C., where again she never had any time for baking. Back on the Hill, Hall Findlay told Capital Diary she recently took time to send a congratulatory note to 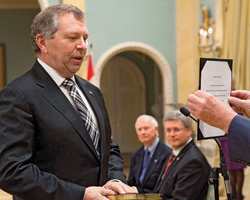 Ted Menzies on his appointment to cabinet as minister of state for finance. Hall Findlay says she was happy to see such a good guy get rewarded. She notes he is seen as not as partisan as Finance Minister Jim Flaherty: when Menzies has to get up in the House “and spout the same party lines, you take it with more of a grain of salt.”

The MP who loves Valentine’s Day
For Newfoundland Liberal MP Siobhan Coady, the holidays ended on Jan. 6., Old Christmas Day. There is a tradition in her family of putting shoes under the Christmas tree on the eve of that day; then Old Father Christmas “comes and fills them with little presents.” This year she got an iTunes gift card, Maclean’s “2010: The Year in Pictures” special edition, and some books. (Gifts are placed inside as well as on top, Coady says.) “It brings a little joy to the end of the season,” notes the MP. Coady is big on holiday celebrations. She is currently working on limericks for Valentine’s Day. Every year she hides prizes in her house and gives out limerick clues on how to find them. Valentine’s Day holds a special meaning for Coady. When she was young, she and her sisters would receive letters from “secret admirers” from all over the world. Only after her father died did she learn that he had orchestrated the whole thing by getting friends in other cities or people travelling to post the letters.

Libby Davies’ singing debut
NDP MP and deputy leader Libby Davies is planning a Valentine’s Karaoke fundraiser at the Russian Hall in Vancouver. The funds will go to getting her re-elected whenever the next election happens. She has selected at least two songs and has a friend teaching her how to sing. The B.C. MP admits her experience belting it out is extremely limited. Says Davies: “I have never really sung live before aside from O Canada and that’s usually with other people.”