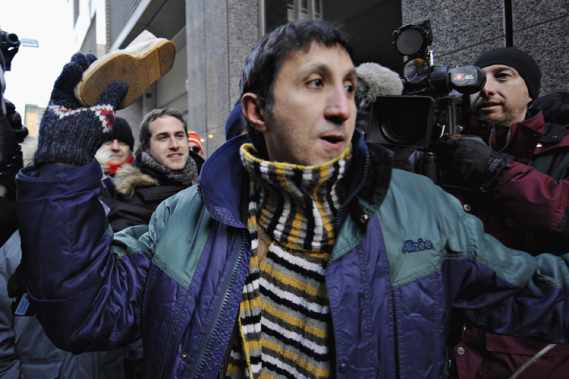 …Only she’s come to inhabit the body of a left-wing, fringe party leader in Quebec’s National Assembly.

In case you missed it—and no one would blame you—Québec solidaire’s Amir Khadir is in a bit of hot water after tossing a shoe at a picture of George Bush at a rally in Montreal last week. Gilbert Gagnon, a teacher at the Cégep de Sainte-Foy, filed a complaint with the National Assembly, claiming the gesture “encourages violence” and that it came at the expense of the “dignity and responsibilities of a MNA.” Khadir has countered by saying his voters knew what they were getting when they elected him.

It seems unlikely that Khadir’s party or his colleagues in the National Assembly will send him off into the wilderness the way the federal Liberals did with Parrish (or hang him out to dry the way the PQ did to Yves Michaud eight years ago), if only because it’s a little hard to make the case hating Bush still matters. Besides, you can hardly blame Khadir for doing what he was essentially elected to do—add a bit of colour to an otherwise sleepy crop of politicians in Quebec. But it’s funny how little time it’s taken for Khadir to be reminded he’s supposed to be bland.

For the record, I’ve been getting my shoe-tossing kicks here all morning.