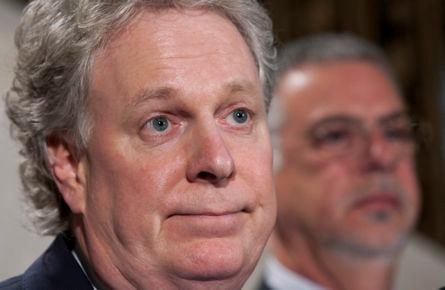 Never mind that the inquiry Jean Charest called to look into judicial nominations in the province doesn’t get at the heart of the controversy surrounding his government—namely, that a former justice minister says he saw Liberal bagmen collecting cash donations to circumvent party donation rules. Even when it comes to the limited scope of Michel Bastarache’s inquiry, it’s getting hard to believe Charest isn’t already sunk, whether or not his government is eventually exonerated.

Consider the government’s confusion over whether or not the judicial nomination process was indeed changed after Charest’s election in 2003. The current minister’s own assistant tells Le Devoir the list of potential candidates for judgeships is shared with the provincial cabinet before the nomination is made. After the justice minister makes his or her recommendation, “the cabinet will look at the other candidates and make a decision,” she says. Under the previous system, the justice minister alone would make the final decision, though it would be presented to the cabinet as a “recommendation” which would then invariably rubber-stamp it.

Now, both Charest and Justice Minister Kathleen Weil have since come out and said Weil’s aide was mistaken. But the issue here is the same as it is between Charest and Bellemare: somebody’s lying and Charest isn’t likely to get the benefit of the doubt. Besides, if what Weil and Charest are saying is true, why would Transport Minister Norm MacMillan admit he once endorsed a party fundraiser’s son for a job as a judge back when Bellemare was justice minister? (For what it’s worth, Marc Bisson, MacMillan’s man, got the job.) Either cabinet members have a say or they don’t, right?

Consider, too, that this isn’t the first time the politicization of judicial nominations in Quebec have been the subject of some debate. In 2005, just as the sponsorship scandal was kicking into high gear, Benoit Corbeil alleged lawyers who worked on the federal Liberals’ 2000 campaign were rewarded with jobs as judges. (The provincial and federal Liberals are, of course, distinct parties, and federal and provincial judicial nominations don’t overlap. But still, it’s the second time high-level allegations have been levelled at political parties for corrupting the judicial nominations process in the last 5 years.) As Chantal Hébert points out, Bastarache’s own appointment as a Supreme Court justice was roundly criticized by opposition due to Bastarache’s ties to Jean Chrétien and the federal Liberals.

Finally, keep in mind this isn’t coming out of nowhere. Reports of favouritism and corruption related to everything from daycare permits to construction contracts have been popping up for the better part of a year now—hell, a new story involving the very same fundraiser linked to the cash donations Bellemare allegedly spotted came out just today!

The PQ has now taken to saying Quebec is run by a “clandestine” network of Liberal party donors and fundraisers. It may be typical opposition hyperbole, but Charest’s government is doing a mighty bad job of proving them wrong.