What's the first thing the astronaut will do back on Earth? Have a hot shower.

Wearing a t-shirt embroidered with the Canadian Space Agency logo, today astronaut Chris Hadfield—who launched to the International Space Station in December and will become the first Canadian to take command in March—chatted live with school kids in Milton, Ont., where he grew up, from his new home on the ISS. Hadfield showed off a few tricks in microgravity, spinning his microphone in slow arcs, floating his wristwatch in mid-air, and even turning himself upside down. He even played guitar, to bursts of applause and cheers.

“What’s the coolest thing you’ve ever seen in space?” one Grade 5 student asked. Hadfield appeared to give it a moment of thought, then answered that his favourite sight is the sunrise. “When the sun comes up, it’s beautiful,” he said. “We come around the world and drive into the sunshine,” the horizon glowing “every colour of the rainbow.” Hadfield has often spoken poetically about the view from space, and has been documenting it in photos; at one point, he slid open the blind on a window behind him, as students gasped and applauded. “I can look down and see the world, and look up and see the universe,” he said.

With Canadian astronaut Jeremy Hansen standing by on the ground, students at Chris Hadfield Public School asked Hadfield what he’ll do as soon as he gets back to Earth (the answer: “have a hot shower”) and whether he misses his family (he tries to talk to his wife every day, and is often in touch with his three grown kids). When one curious student asked whether there’s life elsewhere in the universe, Hadfield acknowledged we don’t know of life anywhere other than on Earth; but astronomers now believe there are billions of planets in just our galaxy, he noted, so it’s quite possible there’s life elsewhere and we just haven’t found it yet. (For more on our planet-filled galaxy, see the latest issue of Maclean’s.) 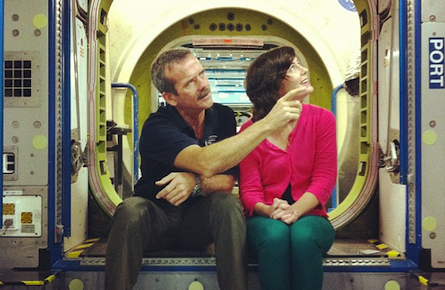 In September, I paid a visit to NASA’s Johnson Space Center to follow Hadfield as he trained for this mission. During that visit, I watched him and his two crewmembers—American Tom Marshburn, and Russian Roman Romanenko—practice doing a live chat with school kids from space, answering all sorts of scripted questions about what it’s like to live on the ISS. As that scenario played out today in real life, it was clear that Hadfield considers public outreach a major part of his role. As Canada’s first space commander, he’s made himself more accessible than any astronaut in recent memory, frequently posting to Twitter, hosting the first press conference from space, and even recording a song on the ISS. Hadfield’s been preparing for this mission his entire lifetime, and with his commandership still yet to come,  millions of eyes are watching.