Chrysler is going electric. It announced today three new plug-in cars, the first of which will roll off production lines in 2010. Yes, the same date Chevy set for its electric Volt. Let the games begin. There’ll be plenty to say about this in the coming weeks and months. But for now, let’s just enjoy this picture of one of the new cars, the Lotus-inspired Dodge ev (there will also be a Jeep and minivan).  Not sure about that bumblebee paint job, but here’s hoping it doesn’t undergo the kind of design dumbing-down the Volt did. 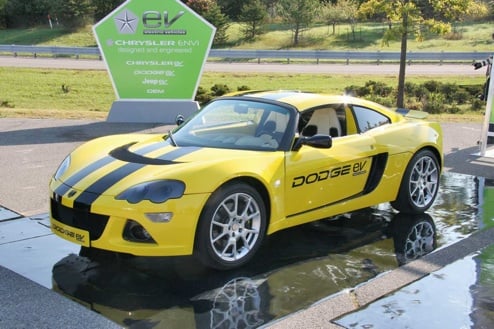