Cindy Klassen sits out the skating season—on a bike 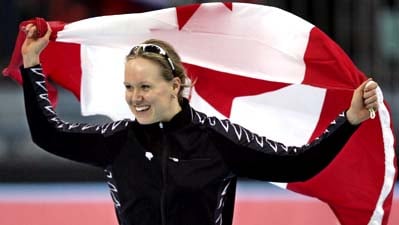 Speed-skating ace Cindy Klassen announced today she’s sitting out the current World Cup season, to allow herself a full recovery from surgery in July on both knees. She decided it would be folly to rush back into competition, just to catch the end of the competitive season. “I haven’t had any setbacks and I don’t want to have any,” she said in a media conference call. “If I push it too hard, who knows what could happen?”

She’s clearly set her sights on another huge Olympics, perhaps even a repeat of her stunning five-medal performance in Turin. She laughed at a naïve question from a Maclean’s reporter (who shall remain nameless) who wondered if it is hard to motivate yourself to train without the goal of a race. “No. I have the 2010 Olympics around the corner and I think that’s enough motivation—to be able to race in your home country is so exciting. I keep thinking about that.”

Another motivating factor, says Klassen, is the stellar performance of the Canadian national team so far this year. Not only is she genuinely happy at her teammates’ success, she knows the younger generation is now breathing down her neck. This past weekend, for instance, Kristina Groves won back-to-back gold and silver in two 1,000-metre sprint races in Changchun, China, her fifth and sixth World Cup medals of the season. Right behind her was Shannon Rempel, with a silver and a bronze. Rempel’s third-place finish Sunday was just .02 of a second behind Groves. Klassen’s short-track brethren are also kicking butt. The Canadian men’s team won gold in the 5,000-metre relay on the weekend, beating out arch-rival South Korea, while the women’s relay settled for bronze.

Klassen says the operations were needed to “clean out” her knees after a decade on the long-track circuit. “It was just kind of wear and tear throughout the years from all the hard training.” And, who knows, maybe some residual damage from mixing it up on the hockey rink, where she used to play in a top-ranked Manitoba boy’s league. Currently, her training consists of weights, and cycling. Much cycling. She isn’t likely to tie on skates until mid-January at the earliest. However, she’ll get close to the ice this Friday, when she attends the opening ceremony for the Olympic Oval in Richmond, B.C.

After her media call Monday, Klassen was headed to the weight room at the Calgary oval to pump iron with teammate Mike Ireland, another of Canada’s top-ranked skaters in sick bay. Ireland dislocated his shoulder last month in a crash in a 500-metre  World Cup sprint in Berlin. A day later, on Nov. 8, Jeremy Wotherspoon smashed his left arm during a crash at the same meet—his first World Cup race of the season. Wotherspoon, and possibly Ireland, will also lay low this seaon, and focus on being fit and ready for Vancouver in 2010. If past performance is any measure, the time off  should work wonders for Wotherspoon, one of the skating world’s most consistent champions. He took a much-needed rest from skating after a disappointing result in Turin. He stormed back last year to win the world 500-metre title with an amazing record of nine wins in 10 events.