Venezuelan President Hugo Chavez made a surprise return home Monday after receiving treatment for cancer in Cuba over the past two months.

The announcement was made on Twitter and on state television, where a host clapped his hands and said: “He’s back. He’s back. Bravo, Commander Chavez has returned! We are very happy to be able to share this joyous news.”

Supporters gathered outside the Dr. Carlos Arvelo Military Hospital in Caracas, where Chavez will continue to received treatment. They cheered, waved Venezuelan flags and held pictures of the leader.

Chavez, 58, has ruled the country for 14 years. He was re-elected to another six-year term in October, but has not yet been sworn in due to ongoing heath issues.

The details of Chavez’s cancer treatment have been few. He underwent surgery for cancer on Dec. 11. He had not been heard of since then, until photos of the president in a bed, flanked by his two daughters, were released last week. 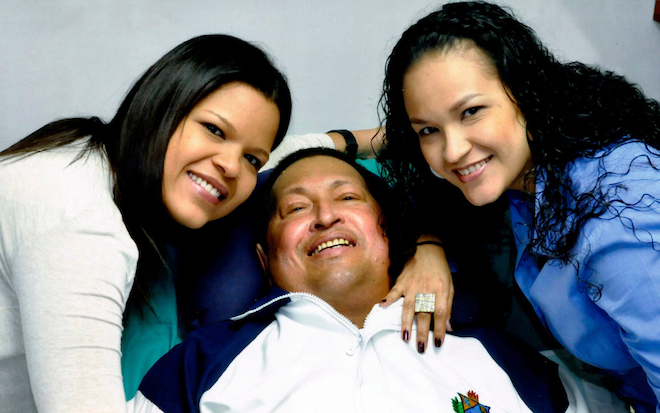 Chavez has yet to be seen in Venezuela. His return was made overnight and hopes that the leader will return to power immediately seem unlikely. His aids said his condition remains “complex,” reports Reuters. Others, who say the leader is unfit to rule, are hoping for an election to choose a new leader. Likely candidates, should an election occur, include current Vice-President Nicolas Maduro–Chavez’s choice to lead–and opposition leader Henrique Capriles.

He will continue to receive treatment at the hospital in Caracas, reports The Associated Press.