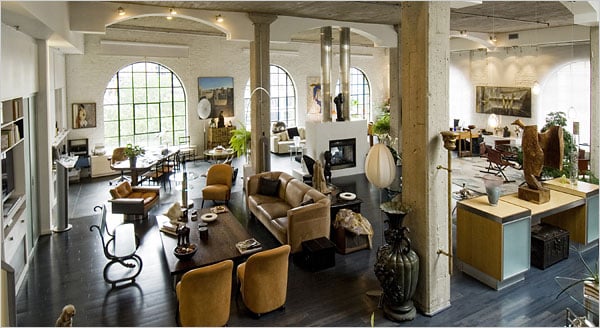 Photo for The New York Times by Yannick Grandmont

Much of Montreal’s allure lies in its decrepitude. Those charming triplexes immortalized in the works of Nick and Mordecai wouldn’t be nearly as charming if the foundations weren’t sinking into the ground, the paint falling off the sides and the spiral staircases surviving on prayers and good intentions. Drafty and dangerous, the apartments were nonetheless cheap: I rented one on St. Urbain, and covered the first month’s rent with my first-ever freelance check, which is saying something. Million-dollar residences were the far-flung stuff of Westmount, Hampstead, Côte-St-Luc and, more recently, NDG – land of the latte and oversized baby stroller.

So imagine my surprise when the New York Times vaunted Real Estate section today picked up on a $2-million one-bedroom condo in downtown Montreal . I talked to the Louise Latreille, the for Sotheby’s Real Estate (!) about the place.

“The New York Times reporter went on the Sotheby’s site, and I imagine she put in a number and this came out,” Latreille said. The ‘this’ in question, of course, is a 3,240-square-foot open concept spread with 14-foot ceilings, a double-sided fire place and views of the city from seven windows, each of which look to be about the size of your average garage door. “You can’t see the dishwasher because it looks like it’s made of wood,” she says. And all of it can be yours for the price of a five-bedroom, four-bathroom, cedar-shingled house on 16 acres of land in the Laurentians.

She has shown the condo 12 times without an offer, though has fielded several calls from Americans hours after the Times piece appeared. She has no doubts of selling the place, though. “I believe in karma. you have to in this industry.”