Confessions of a would-be giant killer 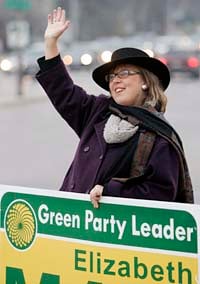 Stéphane Dion was jetting across the country, chasing the elusive (and sizable) undecided vote. Stephen Harper was in Prince Edward Island, among many other places, looking to be exactly the same type of Prime Minister he was before the campaign. Gilles Duceppe was sashaying around Quebec, presumably wondering where it all went so right. Jack Layton was hamming it up on Much Music and getting into a terrific little dustup with Don Newman when the latter had the gall to suggest Jack wasn’t going to be Prime Minister.

Elizabeth May? Naturally, she was in a church basement, serving pie.

May stuck to her base in New Glasgow this evening, where she is running against incumbent Peter Mackay, choosing instead to host some 200 people for Thanksgiving dinner at the New Trinity United Church. There was a band. There was a bucket of turkey stuffing, and a trough of cranberry sauce. And there was May, all hornrims and bobble earrings and gosh-darn charm, dancing around the room in her ubiquitous brown pantsuit like it was the best day in her life. Tomorrow is when it all goes down: she’s going to wave at traffic in the morning, get her vote out in the afternoon, beat Peter Mackay at night, then shimmy, all carbon neutral-like, into the big, boring bastion of Ottawa and change the world. If you’re sitting beside her, as I was a couple of hours ago, she’s impossible not to believe.

She spent the day fending off criticism from her own party that she’d engaged in a ‘Anyone-but-Stephen’ strategic voting scheme. Bah, she said. Scandal for the sake of scandal. And besides, Jack Layton’s a hypocrite. “I’ve voted strategically in the past,” she admits. “Look, there are nine to 10 ridings where we can get seats. Then there are a whole bunch of ridings where people should vote for us because it’ll help the party financially [since 2004, parties receiving over two percent of the votes cast get $1.75 per vote].

“Then there are a handful of ridings where three federal parties split the progressive vote, and I’m not going to be so partisan as to tell people to vote Green no matter what. It’s dishonest to say voters should vote Green no matter what because the best thing in terms of the environment is for Stephen Harper not to be elected. At the same time I wouldn’t disown my own party because my candidates are great. ”

I ask her why other parties don’t seem quite so pragmatic. “Simple slogans are easier to understand, but they are often wrong.”

What, pray tell, do you mean by simple slogans?

Green Party internal polling has May within the margin of error with Peter Mackay. I have my doubts about her chances, but I’m glad I’ll be around for the potential upset.