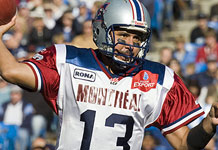 Oh, to be in the Sexy City when the Als are playing in the Grey Cup. Wait, I will be there! As a fan, not an official blogger…

Just as well, because it is sad and disturbing to see an accredited member of the press screaming obscenities at Stampeder fans, as I will no doubt do at some point this weekend (can’t help it, lived in Edmonton for seven years, Calgarians are hicks, etc, etc).

Meantime, Commissioner Mark Cohon tells us the CFL is in pretty good shape all things considered, with the notable exception of the put-a-team-Ottawa initiative, which has been put off until, er, 2011. All in all, buddy’s doing a great job, though.

So it says here, Als by five—and I don’t give a fig about the season series. They have the best QB in the league. They’ve got Ben Cahoon (aka the Big Cahoona), who can haul in a passing seagull if he wants to, never mind the damn ball. They’ve got a young phenom in Jamel Richardson. They’ve got a super-tough D to run against.