Dambisa Moyo on resource scarcity, and China's race for deals 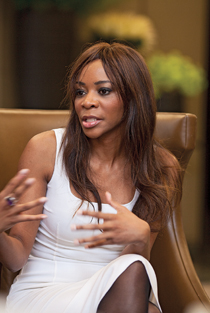 Zambian-born, Oxford- and Harvard-trained economist Dambisa Moyo, 43, first rose to prominence with her bestselling 2009 polemic Dead Aid. In it she argued that development aid from rich countries to poor African nations has left the continent mired in dependency, corruption, market distortion and deeper poverty. In her new book, Winner Take All: China’s Race for Resources and What It Means for the World, Moyo rings a new alarm. Only China, she believes, has realized the pressure that rising world prosperity is placing on increasingly scarce commodities, and has begun to act accordingly.

Q: You are a free-market economist, but here you are expressing a limits-to-growth view.

A: Three billion new people will join the middle class by 2030. This is a positive trend toward a wealthier and more inclusive global order, and it will not be possible without healthy levels of economic growth. My concern is the limits to the kind of economic growth now under way. There is increasing demand for land, water, energy and minerals that far exceeds the diminishing supply.

A: The role of the market and technology will be necessary but not sufficient. At some point, one could surmise, the price of gasoline will be high enough that people will no longer want or be able to purchase it—that’s what economists call demand destruction. There is a big role for this in the West, and market signals in the form of high prices can push us to invest more in things like efficiency and new forms of energy. The problem is we have not seen demand destruction work in the developing world. There, consumption fulfills basic needs and people are not able to forgo it regardless of price increases.

Q: As for China’s specific role, you seem not so much politically worried as economically, even environmentally, concerned. It’s not that China’s actions are necessarily wrong, but that the West should be aware of the implications.

A: There’s nothing wrong about China going around the world making resource deals to support its growing population. What it’s doing makes a lot of sense. Yes, my concern is that other countries will not catch on until it is too late. In a zero-sum world, what will happen if China wins the race for resources? Other countries seem to be asleep while China is making a concerted effort. Some 24 ongoing wars and violent conflicts have their origins in commodities, and this trend is poised to continue. China is befriending what I call “the Axis of the Unloved”—countries and regions such as Africa, Brazil, Colombia, Argentina and parts of Eastern Europe that have been basically ignored by the Western economies. China is the leading trading partner and foreign investor in many of these countries—a very different approach to the West’s largely aid-based model.

Q: The Chinese economic edge in this is that its state capitalism offers advantages that the Western laissez-faire model does not.

A: Favoured Chinese companies have a zero or near-zero cost of capital. State-owned banks provide highly concessional credit lines, in the form of government grants or low-interest loans. Favoured companies also benefit from tax breaks and the preferential allocation of key contracts. Like the US$12-billion credit line extended to Wuhan Iron and Steel, a major steel producer, by the state-owned China Development Bank, for financing “overseas resource base construction.” And of course it helps to have a war chest of over US$3 trillion, while Western economies are struggling with cash constraints.

Q: The Chinese political edge is that it’s famously untroubled by governance issues in the countries it deals with.

A: Well frankly, in practice there is little to distinguish between the commodity counterparts of Western nations and those of China. U.S. and European countries are just as happy as China to strike deals with countries with less than pristine reputations—whether it’s Saudi Arabia, Venezuela or Russia. Two wrongs don’t make a right, but in this narrow sense, it’s unfair to constantly point fingers at China.

Q: So you think that criticism of China on both scores—cheating, so to speak, economically and being too comfortable with dictators politically—is often unfair and wrong?

A: Cheating is one thing, meddling in the markets is a whole other thing. Virtually all governments meddle in the commodities markets. Western governments are particularly egregious in this respect. The United States paid US$6 billion in commodity subsidies in 2010. OECD countries spend a total of US$226 billion on agricultural subsidies yearly. And in the EU, the Common Agricultural Policy sees some 40 billion euros spent on direct farm subsidies. So if meddling in the market is “cheating,” China has a lot of company. And the West has never had much of a problem dealing with despots and dictators if there is a benefit to be gained.

Q: For Third World nations, dealing with China rather than the West is often more attractive, you point out, not just for governments, but for the broad public. Why?

A: I think the reasons are quite clear. China pursues strictly business, symbiotic relationships, trading access to commodities for infrastructure, employment and other economic benefits. Take employment. The construction of the Imboulou Dam in [the Republic of the] Congo in 2010 employed 2,000 locals (compared to 400 Chinese). Survey results indicate that Africans much prefer to deal with the Chinese than with Westerners. In Ivory Coast, Mali, and Kenya, more than 90 per cent of respondents see China’s economic growth as “a good thing.” In Tanzania, 78 per cent agree, but only 36 per cent feel the same way about American influence. The difference is stark. Across the developing world, people want jobs, infrastructure and investment and the Chinese engagement does exactly that. Contrary to the assertions you commonly find in the Western media, I have seen no evidence that the Chinese are exploiting the countries they make deals with. In this sense these are old wives’ tales. To my mind, China’s strategy depends on mutually beneficial relationships—at least it has thus far.

Q: The West is being replaced by China both for aid and as a business partner?

A: Without question. As a result of the 2008 financial crisis and the debt crisis that continues to plague Europe, countries are slashing their budgets for bilateral aid—they have to, there is no choice. For the U.S., it makes little economic sense to borrow money from China and then give it to poor countries in the form of aid! Chinese investment in Africa increased 50 per cent over the past decade, with flows topping half a billion per year. Relatively small, but, all the same, growing.

Q: Is there another commodity that will soon join oil atop the political-economic heap?

A: Oil is the commodity that dominates the political conversation. The U.S. Energy Information Administration projects the average price will reach US$135 per barrel by 2035. But we are going to start hearing more and more about other commodity shortages. Water is one major one. American intelligence agencies have raised the alarm over increasing risks of water-based conflicts around the world. Some industrial commodities, including copper, have mounting supply and demand imbalances. Consider the top three sectors using copper: electrical and electronic (42 per cent), construction (28 per cent), and transportation (12 per cent). The three billion new middle-class people by 2030 will want computers, TVs, washing machines, cellphones and dishwashers.They will live in new buildings and buy new cars. All of that means a heavy demand for copper, a mineral that is costly to extract and in increasingly short supply. Since 2003, copper inventories have declined 32 per cent and the price has increased by almost 400 per cent. And mining businesses will have to go much farther afield to more risky countries and terrains in order to source it. This is a preview of the mounting imbalance between supply and demand.

Q: The commodities you discuss, from land to water to oil, are key to Canada’s future. What effect will the Chinese resource rush have here?

A: To a large extent that depends on the Canadian government. In 2010, Canadian authorities blocked the foreign purchase of Potash Corporation, thus effectively signalling the sensitivities around Canadian resource space. Although the Chinese have successfully executed commodity deals in Canada, one would expect the Chinese buying spree seen elsewhere won’t necessarily be plain sailing in Canada.

Q: During Stephen Harper’s recent visit to China, a Maclean’s reporter noted one instance of bilateral trade—pork from Canada for laptops from China. Is that not a historic reversal of First World-Third World trade? Does it point to a manufacturing-less North America?

A: Well, markets are dynamic. What might be cost-effective to produce in China today could be cheaper to produce in North America in the next decade—if energy costs such as natural gas hover at low levels. That aside, I would expect that China’s position as a key trade and investment partner will rise in Canadian ranks. More specifically, Canada would be very rational to foment greater ties with China as a trading partner after the recent U.S. decision on the Keystone pipeline.