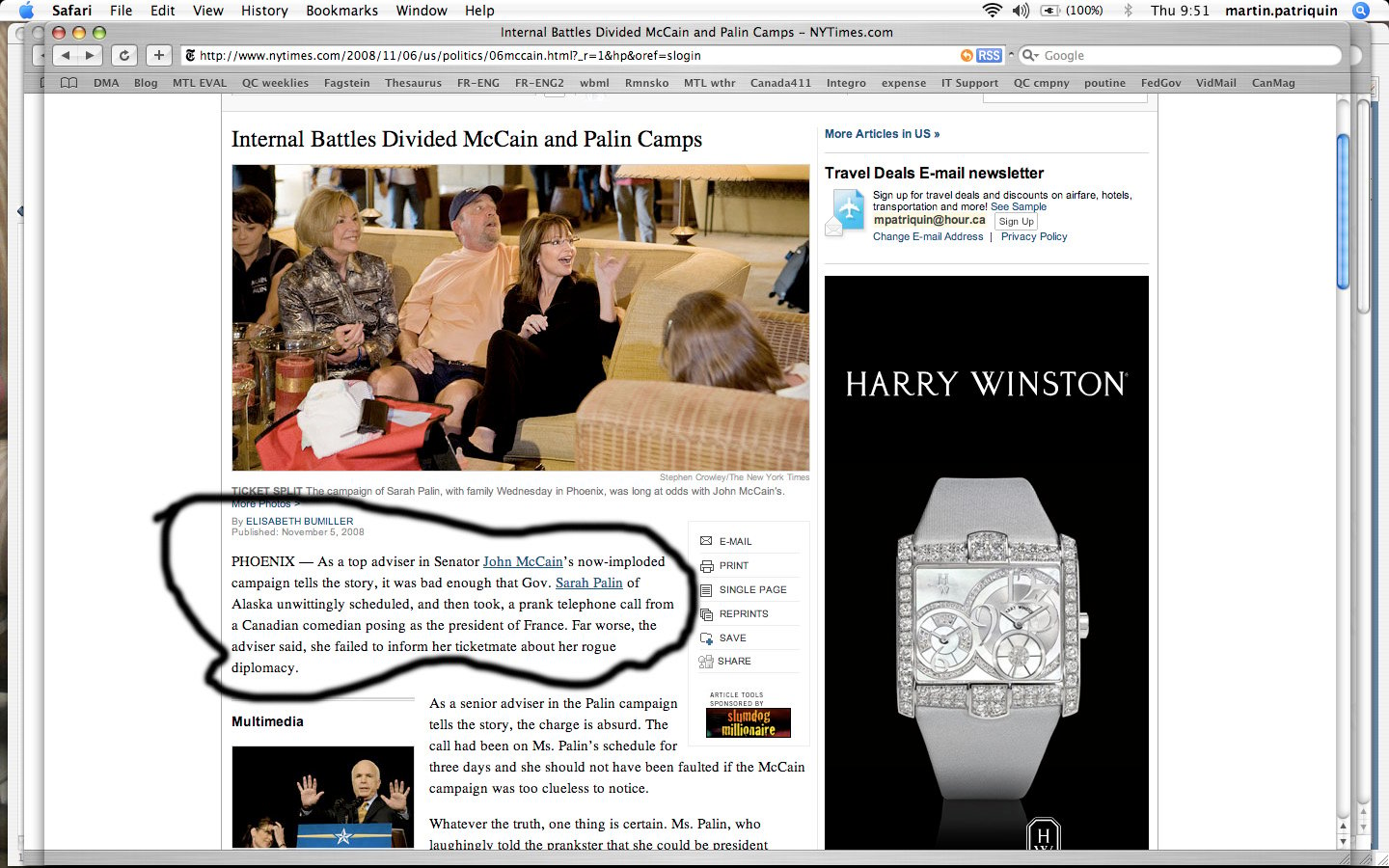 We here at DMA central would be remiss if we didn’t pile on like everyone else and bow to the brilliance and sheer awesomeness of Les Justiciers Masqués, who managed to prank the bejesus out of some $150,000 pantsuited Alaskan hockey mom whose name I can no longer remember for some reason. Theirs was a prank call that was heard around the world, and today they got their proper due: prominent acknowledgment in one of the best newspapers in the world that their little stunt was a large nail in the coffin of McCain-Palin. (Palin! That’s it! So bad with names…)

The lede of The New York Times’ inevitable post-drubbing ‘Wow, these two were screwed from the start’ article says it all:

“As a top adviser in Senator John McCain’s now-imploded campaign tells the story, it was bad enough that Gov. Sarah Palin of Alaska unwittingly scheduled, and then took, a prank telephone call from a Canadian comedian posing as the president of France. Far worse, the adviser said, she failed to inform her ticketmate about her rogue diplomacy.”

The piece goes on to detail the deliciously bitchy infighting between the McCain and Palin camps around the disastrous Katie Couric interview and how shopping at Neiman-Marcus and the like is a not-so-good visual for someone campaigning on the Joe the Plumber ticket. (Also, Fox News (!) has a piece today about how Ms. Palin allegedly didn’t know Africa was a continent. In fairness, though, it’s not like she could see it from her house.)

“Ms. Palin appeared to believe that she was talking to President Nicolas Sarkozy of France, even though the prankster had a flamboyant French accent and spoke to her in a more personal way than would be protocol in such a call,” reads the final graf of the Times piece. “At one point, he told Ms. Palin that she would make a good president some day. ‘Maybe in eight years,’ she replied.”

The New York Times piece, it’s worth noting, is built entirely around anonymous McCain sources who are understandably bitter at this point in time. Still, it’s amazing that two loudmouths from Montreal were seemingly instrumental in mucking up an already teetering campaign right near its end–and right where it counted.