Danger on the narrow highway

NOW: (Sicamous) Most of the Trans-Canada between Revelstoke and Sicamous is two lanes. Get stuck behind a truck – or more likely at this time of year, an RV – and you’ll be following it for a while. Traffic moves at the speed of the lowest common denominator. This encourages risky overtaking, but it also squeezes oncoming vehicles together. 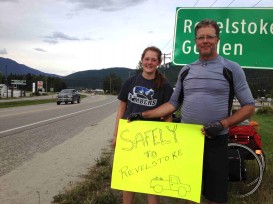 Rob Young knows this, which is why he refuses to take his bicycle on that stretch of road. He’s on a cycling trip with his 14-year-old daughter Claire; they left their home in Nelson on Saturday and plan to return Friday. They’ve been cycling the mountain roads under their own power, but when I met them today they were looking for a sympathetic pickup truck driver.

“When you’re driving it, it’s just too narrow,” he said. “The shoulder’s dodgy and it’s too narrow for two vehicles to pass with bicycles on the side of the road. I don’t like to even drive it in a car, but I won’t take a bicycle on it.”

THEN: (Creston) Far south of the future Trans-Canada, and making much slower progress, Thomas Wilby and Jack Haney finally ran out of road again in 1912 at the railway town of Yahk. It was night time and as they had first discovered at North Bay, there were places where there just weren’t any paths or trails to follow.

But they didn’t give up – there was still an alternative, thanks to a pair of guides and the railroad.

“We were astride the glittering rails which were to lead us along the intense darkness of the Yahk Loop,” wrote Wilby in his book, A Motor Tour Through Canada. 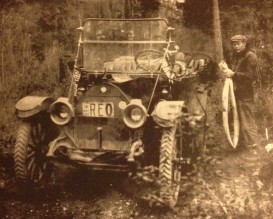 “There was a gasp as one felt the first forward plunge of the car and the white path of acetylene light shot before us into the immense shadows of that forest wilderness. Four pairs of eyes strove to pierce the distance ahead and behind; and every nerve was strained in listening for a possible monster of steel and steam which might dash down upon us at any moment from around a curve, or catch us in its swift career from behind! Muscles were tense, ready for the leap to a precarious safety at the first sight of an approaching headlight…”

They didn’t realize in the dark that they were on the edge of a cliff with a 160 metre drop, descending at times so steeply that the car would roll under its own weight. They endured “incessant and infernal jiggling and jolting that shook the teeth and vibrated through the spine.” Sometimes, they got stuck between the ties and would have to jack up the car to roll forward again; their rear tires were ripped apart by the ties’ spikes. After they finally found a road again, it took another three hours to drive the 19 kilometres through the soft gravel of the narrow road through the Goat River Gorge, listening to the loosened stones bouncing down to the river 150 metres below.

They arrived in Creston at 3 a.m., exhausted, though Haney was still able to summarize the drive in his understated diary: “Had h__l of a time getting to Creston… Fourteen miles on ties, and up some fierce hills.”

SOMETHING DIFFERENT: (Craigellachie) For much of its route the Trans-Canada follows the rail line across the country, and here, 46 kilometres west of Revelstoke, is where the Last Spike was hammered home in 1885 to complete the original link across the country.

The caretaker of the site here, Lorne, located for us the actual spike on the track that was “the last spike,” right beside the monument, but pointed out that the original spike was removed immediately and replaced with another, slightly larger. He also pointed out that in the famous photo of the spike being hammered in by CPR director Sir Donald Smith, there seem to be a number of empty places on adjacent ties that are still waiting for spikes of their own, so perhaps it was not truly the final piece of the railroad. 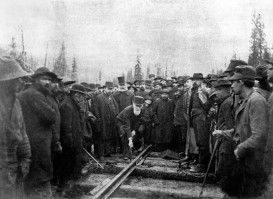 And just for good measure, he mentioned that the track has been replaced seven times since 1885. It reminded me of the street sweeper who’s proud that he still uses the same broom after years of service, though the brush has been replaced 10 times and it’s on its ninth handle.

“There are a lot of stories here that never made it into the history books,” Lorne said, and told us about 26 Chinese workers who died of starvation in their construction camp later that winter of ’85. Apparently, the train driver was under orders not to stop for any reason between stations, and the out-of-work labourers were snowed in and couldn’t leave the camp. “You won’t find that story written anywhere,” he said. Well, true or not, I’m proving him wrong now… 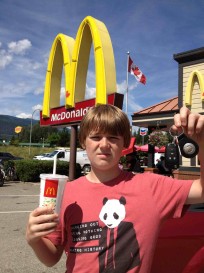 At first we couldn’t find them so my dad was a bit concerned, as he should be because we don’t want anyone driving off with our only mode of transportation. Someone had turned them in but that was a close one. I can only imagine how bad it would be if we lost them.

Other than that our day was pretty much any other day of just driving and stopping and asking people questions. Tomorrow is a questionable day because we don’t know where we are going but hopefully it will be great regardless.