Day 11 on the Trans-Canada, Sackville, NB

THEN: There are many who still keep fond memories of the old ferry that linked Prince Edward Island to New Brunswick, and which was officially a part of the Trans-Canada Highway.

The original Abegweit ferry could carry almost a thousand passengers (though only 60 cars) while it also broke ice during the winter on the Northumberland Strait. It was replaced in 1981 by a much larger ship that could carry 250 cars; it was also called Abegweit, the local Mi’kmaq word for Prince Edward Island, meaning “cradled on the waves.” However, as journalist Walter Stewart observed in his book “My Cross-Country Checkup,” ferrygoers often preferred to call the ship “A Big Wait,” which was frequently appropriate.

The newer ship was disposed of when the 1997 completion of the 13-kilometre Confederation Bridge made a ferry service redundant. According to Wikipedia, the ship was sold to a broker in Texas who eventually sold it to a buyer in India, and it was sailed across the Atlantic and through the Mediterranean on its last voyage, to be scrapped in India in 2004. 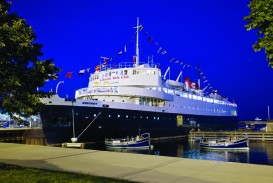 But the older ship found a much better fate. It was bought by the  Columbia Yacht Club in Chicago, which had been refused permission by the city to construct a clubhouse on its stretch of waterfront. The club bought the ship, now called the Abby, and moored it permanently at its property to serve as its clubhouse.  She was even given a fresh paint job a couple of years ago, so she looks good as new.

NOW: The ferry may still be remembered fondly, but Islanders won’t trade their Confederation Bridge for anything. It’s a remarkable feat of engineering that turned 15 years old on June 1. 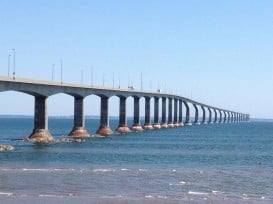 It took four years to build the bridge, and at 13 kilometres long, it’s officially the longest bridge in the world that crosses ice-covered water. Among other bridges over water, though, it doesn’t even make the top 15 – it’s dwarfed by the longest bridge of them all, the Qingdao Haiwan bridge in China, which stretches almost 43 kilometres, followed closely in the stakes by the Lake Pontchartrain Bridge in Louisiana, at more than 38 kilometres.

The bridge is 40-to-60 metres high and 11 metres wide, with one lane each way and no overtaking allowed anywhere. Pedestrians and cyclists must travel by shuttle bus, but the guardrails are just 1.1 metres tall, giving enough space to still allow drivers a view of the strait.

It was built by the private consortium Strait Crossing Development Inc. at an estimated cost of $840 million dollars – $210 million over its initial budget. The federal government still has to pay for it, though, sending annual cheques to the consortium of $41.9 million until 2032, at which time it takes over ownership. And the consortium gets to keep the tolls till then, too. 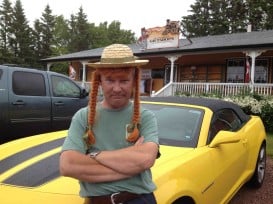 Anne is huge here, and there are thousands of potential mementoes of Lucy Maud Montgomery’s red-haired, freckle-faced creation. As Walter Stewart also wrote in his book, “we have been able to avoid Anne vibrators and Green Gables garbage bags,” but pretty much everything else is available, including straw hats with built-in pigtails.