Day 12 on the Trans-Canada, Springhill, N.S.

THEN: I’m driving south from Sackville toward Halifax. This is so that I can double-back to drive the Trans-Canada Highway from New Glasgow, N.S., up to the New Brunswick border, which is the more common route for the TCH through to Cape Breton and Newfoundland, avoiding Prince Edward Island and the seasonal ferry from the island to Pictou, N.S. 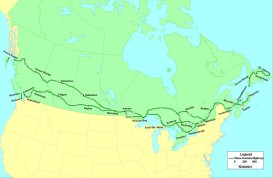 There are a number of places where the TCH splits into two, to head in different directions. On the prairie, the Trans-Canada follows the traditional route close to the U.S. border while also breaking away west of Winnipeg onto the Yellowhead Trail that leads through Edmonton to Prince Rupert on the Pacific Coast.

And in Quebec, it either goes west from Montreal to Ottawa, or north from Montreal all the way up to, and through, Val d’Or. This is not a well-known route: the spokesperson from Quebec’s Ministry of Transportation didn’t believe me when I told him of this alternative designation for the Trans-Canada Highway. “It’s not what people think of when they think of the Trans-Canada,” he said. 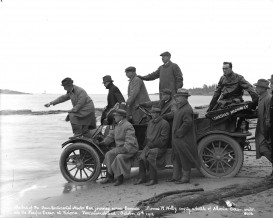 But I’m also coming down here so that I can drive up from Halifax on the old roads that would have existed in the early years of the last century. This Trans-Canada Trek will not only retrace the Trans-Canada Highway of 50 years ago but also the first coast-to-coast Canadian road trip, which took place 100 years ago in 1912. And while I’m at it, I’ll retrace the famous coast-to-coast drive of Dr. Perry Doolittle in 1925. Doolittle founded the Canadian Automobile Association, and is also known as “the father of the Trans-Canada Highway.

Once I reach Halifax this weekend, I’ll start telling the stories of those original, pioneering road trips. They were no drive in the park!

NOW: New Brunswick voted this week to name its entire stretch of Trans-Canada Highway as the “Highway of Heroes,” to honour Canada’s fallen soldiers. It’s the fifth province to do this: Ontario was the first, after which Saskatchewan, British Columbia and Manitoba renamed portions of their TCH as Highways of Heroes. 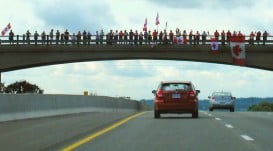 An overpass on Ontario's Highway of Heroes

It’s a common practice to dedicate highways and public works to military veterans, but there was a reason for Ontario renaming 150 km of Hwy. 401: it’s the route between the air base at Trenton and the coroner’s office in Toronto along which the bodies of soldiers are transported when they’re first returned to Canada; people come out by the hundreds to stand on the highway’s bridges to honour the passage of the hearses.

This doesn’t happen at the other highways. For that reason, I think it lessens the stretch of 401 to copy the designation onto other highways, although I appreciate the honouring of our soldiers. 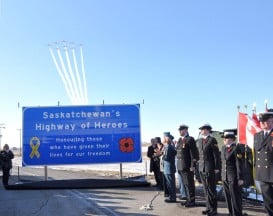 It’s ironic this is happening: when Prime Minister John Diefenbaker opened the Trans-Canada Highway in 1962, he declared that “may it serve the cause of peace. May it never hear the tramping sound of marching feet.”

But the name’s catchy, and if it helps to remind us of what’s happening to our soldiers away from Canada, then that’s a very good thing.

SOMETHING INTERESTING … When Cpl. Kate MacEachern pauses in her march along the Trans-Canada Highway on “The Long Way Home,” she takes off her army boots and slides on these comfy pink slippers. 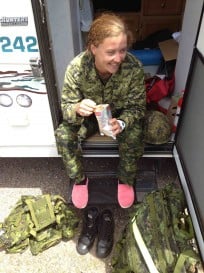 The 33-year-old single mom is marching 572 km from her base at CFB Gagetown in New Brunswick to her hometown at Antigonish, N.S., to raise awareness for Soldier On, an organization that helps soldiers recover from injury.

MacEachern was seriously hurt herself five years ago in Edmonton while practising for a military event; she was a member of the ceremonial mounted division when she was thrown from her spooked horse into a post. Her head and spinal cord were damaged; she had bleeding in the brain and was told that her life would never be the same again.

That’s true: her life is very different now. “I want to show people that you can stand up to make a difference, and not just sit down and let life happen around you,” she explains, sitting on the step of the RV trailer that’s following her on this three-week walk. She carries a 20-kilogram pack, wears full battle fatigues, and covers at least 25 kilometres and up to 40 kilometres each day along the TCH, taking time also to speak to audiences about Soldier On.

“My main goal is to just get to the end of each day, and when it hurts, keep going. And when it really hurts, remember why I’m doing this.” 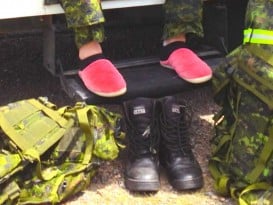 More comfortable than the army boots

And the slippers? She bought them a few days in when she realized she needed a break from her five pairs of boots, sandals and flip-flops. They match a pair that she left behind at home.

“I’m not a girly-girl by any means,” she understates, “but every now and again it’s nice to have a touch of familiarity, a touch of pink. And they’re a lot more comfortable to wear than the boots.”