THEN: Bob and Carol Hyslop remember the day in 1990 very well: their neighbour Dianne Powell came over, and “we were sitting on the porch and Dianne said ‘well, what are we going to do about the road?’” 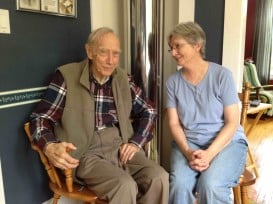 “The road” was the planned expansion of the dangerous two-lane Trans-Canada Highway, which the government wanted to widen into four lanes alongside its existing route – right through the scenic Wentworth Valley.

The two-lane highway was built in 1957 to be part of the new Trans-Canada Highway, but traffic was much lighter then. It replaced the old through-route that was still just gravel and dirt, as well as the quickly redundant rail line. But as the highway developed into a transportation route that connected Canada to both Halifax and Newfoundland, it became quickly outdated – and dangerous. Drivers would take risks passing slower traffic on the curves, and accidents were horrendous.

“It had to be done,” remembers Carol, now a retired elementary school teacher. “Traffic was terrible. Fumes from the traffic were terrible – children were getting asthma. You couldn’t cross the road. There were always accidents, but that was the only route they’d thought of to develop. They hadn’t considered any alternatives. So we got a petition going. We didn’t want it to go through the valley, period.” 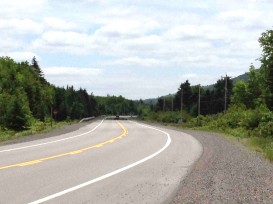 The Hyslops helped form the Wentworth Valley Environmental Protection Association, which began with about 40 members. Most of the people involved were fairly educated and well-connected people who owned property in the valley, which is well known for its ski hill.

Once the association was formed, it began a letter writing campaign that didn’t stop until alternative routes were tabled, and then decided upon, and eventually the new Trans-Canada was built away to the west on the top of the Cobequid mountain range. It gets more snow than most places and drivers sometimes get stranded – hundreds were trapped in the snow several winters ago – but the valley itself is now quiet and clean and beautiful.

The new road was so expensive to construct that it’s a toll road – the only toll road on the Trans-Canada Highway. I’ll be getting into that touchy subject over the next couple of days in New Brunswick.

Former local MP Bill Casey credits Carol Hyslop with making it all happen. “She had the most powerful computer in the world. It was only a Commodore 64, with a dot-matrix printer, but it got a highway moved to the top of a mountain.”

Carol says she still has that computer, stored away in a box. And when she says it, Bob, a retired pilot, grins a big grin. “I’m proud of her,” he says. “She took on the government and won. She proved that you really can make a difference, you know.” 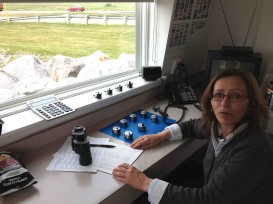 Glenna Isaacs with her clickers and binoculars

NOW: There’s a small lighthouse beside the big Nova Scotia sign at the Welcome Centre on the provincial border with New Brunswick. Normally the door is locked, but Glenna Isaacs makes an exception to let me inside and explain her job.

“I count all the cars, all the trucks, all the motorcycles. I check all the licence plates and record them. There are four of us now on shifts, and we do this all year. In the summer we’re busiest – we do this from 6 in the morning till 10 at night.”

Glenna works for the research division of the Nova Scotia Department of Tourism, and she says there’s been somebody doing this job for as long as she can remember. Since this is the only good road into the province other than on the ferry, she says it’s an accurate way for the government to know who’s visiting. 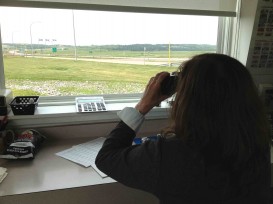 She’s armed with a dozen clicker counters, for different kinds of vehicles and plates, and a pair of binoculars for getting a close-up of unfamiliar plates. When a car doesn’t have a front plate, she swings around in her chair to watch it pass by the side window and record the rear plate.

Couldn’t they just use a computer to register licence plates, like they do with the 407 toll highway north of Toronto?

“They could, but it would be very expensive,” she reasons. “And computers don’t see what we do, either. We can pretty much tell if a truck driver is coming in on vacation, using his rig to save on his transportation costs.

“And why spend a lot of money just to get rid of jobs?” 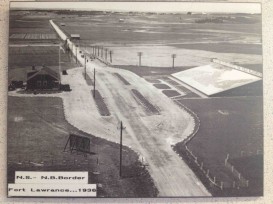 The Nova Scotia Welcome Centre in 1936, with the Big Map on the right.

SOMETHING DIFFERENT …  At the Welcome Centre, I ask about the Big Map, an enormous concrete relief map that used to be on display beside the parking lot, 50 metres long and 20 metres high. It was built in 1934 but is long since gone, removed during the Second World War, apparently, so that it couldn’t show enemy spies where Halifax was.

The person who best remembers it is Doug Mcmanaman, who has worked at the Centre for 30 years and whose dad used to tell him about it.

It doesn’t take long, though, before Doug lets it out that he has an unusual talent: he can balance pretty much anything on pretty much any part of his body. He took me into the supply room to demonstrate, and you can see the video here. 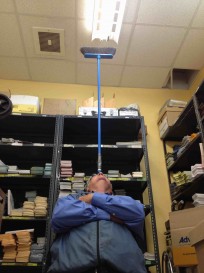 Doug Mcmanaman, doing what he does best

“I’ve always been able to balance things,” he says. “I hold 426 world records you know, for balancing and for shooting. Just Google my name and you’ll see them.”

It’s true, though they’re not Guinness world records – he doesn’t have much time for Guinness, which has a very time-consuming acceptance policy. Instead, he uses a New York-based company called Record Setters, and if you search his name on its website like this, you’ll see his video evidence: “Longest time to balance broom on thumb while lying on back,” “Longest time to balance six toilet paper rolls on forehead whilst sitting,” and so on. There are hundreds of them, and other, non-balancing records too – “Fastest time to put an egg inside a balloon and take it back out” – and a bunch of shooting records, such as “Fewest rifle shots to hit a spaghetti noodle from 50 yards away.” 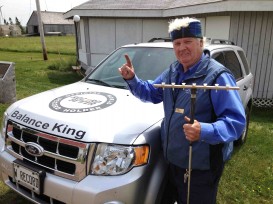 The Balance King, with a balance bar he uses for holding eggs and golf balls.