THEN: The old Trans-Canada Highway from Moncton to Fredericton in the 1980s and ’90s was a lethal stretch of two-lane road that desperately needed improvement – it just couldn’t handle the constantly growing volume of traffic. There were an average of nine fatalities every year and three times as many severe injuries.

However, as New Brunswick’s Minister of Transport Claude Williams recalls, Brian Mulroney’s federal government was not willing to put any money into the project, so the provincial government of the day was forced to go it alone. And it didn’t have any money, either. That meant only one thing if the road was to be built: a drivers’ toll.

Then-Liberal Premier Frank McKenna was “a difficult man to deal with,” says Williams. “He wanted it done and done quickly, so he said ‘it’s my way or the highway!’ I guess he got both.” 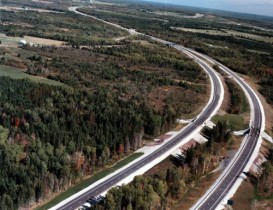 The brand-new, 195-kilometre road was a marvelous piece of engineering that improved drivers’ safety overnight, but the principle of paying a toll to use Canada’s national highway was anathema to New Brunswickers. The toll was so despised – especially by commuters into Moncton and Fredericton, faced with a $7 charge for each car – that Bernard Lord’s new Conservative government was elected in 1999 with a campaign promise to remove the tolls, which it did the following year.

But the billion-dollar price tag had to be paid by somebody, and the bill just added to New Brunswick’s deficit. The 25-year contract between the province and the privately-owned construction company had to be recovered, and Williams says that all New Brunswickers are still paying a “shadow toll” of about $20 million a year, based on the road’s traffic.

It’s an especially contentious issue because so much traffic on the Trans-Canada Highway uses New Brunswick as a corridor for Quebec and Ontario trucks to reach Nova Scotia and Newfoundland, with reduced benefit to New Brunswick. Indeed, the possibility of tolls has been raised again, but the province’s politicians know it will be an unpopular proposition. According to Williams, a reasonably priced charge just wouldn’t raise enough money to make enough of a dent – which means, not enough to warrant the outcry it would provoke.

Political scientist Donald Savoie of the University of Moncton summed it up last year for the CBC: “I think New Brunswickers live in some kind of dream world where we say no to economic development, we say no to foreign involvement and we say no to tolls,” he said. “We think through black magic or voodoo economics that these things will get paid.” 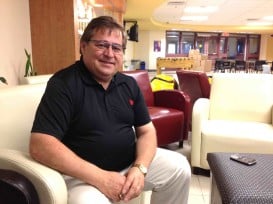 NOW: Claude Williams is proud of the Trans-Canada Highway in New Brunswick. He’s also pleased, as minister of transport, that the province doesn’t have to build any more of it: aside from 2.8 kilometres under construction in the north, the entire 513 kilometres of the four-lane TCH through the province from Quebec to Nova Scotia is finished and complete.

There are still plenty of other roads to work on, including a $540 million construction project down to St. Stephen near the Maine border, but the Trans-Canada now just needs maintenance. That’s good, because it’s special.

“It may be just a name, but I think it brings an identity to Canada,” he says. “It’s really the only physical thing now that links all the provinces. Maybe not so much for the younger generation, but it means a lot to people like me. It’s a tangible thing that really does create pride in our nation.”

SOMETHING DIFFERENT … Just off the Trans-Canada, north of Moncton, Magnetic Hill has been drawing skeptical tourists for the last 80 years.

The story goes that locals would tell of the mysterious hill where wagons pushed along their horses; finally, in 1933, three newspapermen from Saint John drove up to Moncton to find the hill and record it for the Telegraph Journal.

According to the pamphlet I was given when I paid my $5 to drive on the hill, “the intrepid trio spent most of a frustrating and often embarrassing morning stopping at the foot of every hill or minor incline they could find, slipping the car in neutral and waiting for it to roll back up hill.

“By 11 a.m., vowing vengeance on the pressroom, they stopped at one last hill, just before the intersection with the old highway. Setting the car in neutral, they got out to stretch their legs a last time before the trip back to Saint John and, you guessed it … nature chose that moment to show its hand. Slowly at first, then with gathering momentum, the roadster began to roll back uphill. Moncton’s incredible Magnetic Hill would now be officially recorded!

Is it impressive? Watch the Camaro take it on here and judge for yourself.