Day 2 on the Trans-Canada, Gambo, NF.

The Trans-Canada Highway was no exception. In 1962, when the TCH was declared officially open by Prime Minister John Diefenbaker, 600 km of its 980-km stretch across The Rock was still unpaved; when the circus wanted to come to town in 1963, it ended up cancelling because highway bridges wouldn’t support the weight of the elephants, which would have had to be walked separately from their trucks over the road’s numerous river crossings. 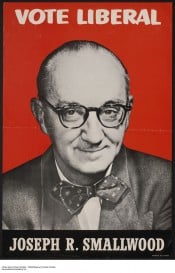 The agreement first proposed in 1949 between Ottawa and the provinces called for each province to share the cost of construction 50/50 with the federal government, though Ottawa would pay the cost of road-building through national parks. Smallwood delayed construction while he spent his provincial money on other things, like schools and hospitals. In 1964, he argued that hardscrabble Newfoundland just couldn’t afford to complete the highway, and eventually Lester Pearson’s new Liberal government caved and agreed to foot 90 per cent of the bill. That’ll do nicely, said Smallwood, and promptly coined a provincial slogan: “We’ll finish the drive in ’65.” Which they did, Nov. 27, 1965, when the last strip of asphalt was laid and two convoys of cars, one from St. John’s with Smallwood among them, and one from Port Aux Basques that included Pearson, met halfway across the province in Grand Falls.

NOW: I noticed the bicycles propped against the window of the Tim Horton’s when I walked inside. They looked heavy, loaded with luggage. Another bicycle was propped against the other door and it looked even heavier. The cyclists were inside, greeting each other as they met for the first time, cycling in opposite directions across the country.

Daman Milsom and Kibby Evans, both recently graduated biology students, are cycling home to Victoria. They flew in to St. John’s last week and left Cape Spear four days ago, pedaling into the west wind.

Harry Jones and Will Samson-Doel, both university students with a summer to themselves, left home in Toronto on May 1 and expect to reach St. John’s by Friday. Then they’ll fly with their bikes to Vancouver and cycle home from there. 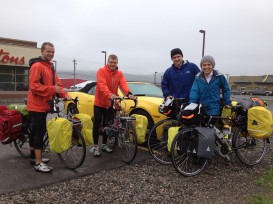 All are in their early 20s and none of them have done any serious cycling before these journeys. Damam and Kibby had never ridden farther than 60 km in a day, and Harry and Will were even more neglect: “I only used a bicycle to commute,” said Will, “and I’ve never commuted more than 15 minutes. You don’t need to be super-athletic to do this. You just need the time, and the bike.”

The Toronto cyclists had seen only one other pair of cyclists before today, in Nova Scotia, and they’d not stopped to chat while they pedaled in different directions. Are they having fun? “Yes, in most ways, this is what we expected,” said Harry. Once you’re into the rhythm and your legs have adjusted, it’s a great way to travel.” His friend Will agreed: “I’ve never been east of Quebec City. I didn’t expect to see such differences between the provinces.”

The greenhorn Westerners were pleased to hear this, since they’ve cycled only a little more than 200 km so far and the weather’s been terrible. “I’ve been surprised by the weather,” said Kibby. “I thought uphills would be bad, but the downhills – you go so fast and the wind’s so cold. At least uphill you get warmer with the pedaling.

All four are doing their cross-Canada rides to raise money and awareness for causes close to their hearts. Harry and Will say they’ve raised $13,000 so far for the First Nations Child and Family Caring Society; you can read their blog here at willandharrybikecanada.blogspot.ca. Damam and Kibby say they’ve raised $16,000 toward a $50,000 goal for Trekking4Transplants, which also hopes to persuade 10,000 people to become organ donors. You can read about them on their website here at trekking4transplants.ca.

I wished them well, got in the Camaro and turned up the heat as I drove west. I didn’t want my coffee getting cold. 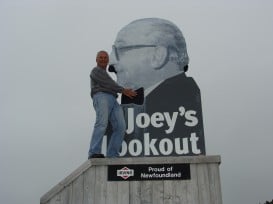 The scenic lookout beside the TCH above town, with its dramatic view over Freshwater Bay, is named after Smallwood, but there’s little evidence that he would come to ponder the vista. However, a massive black-and-white photograph of his head looks out from here now that he’s been dead these last 20 years.

Newfoundlanders may hold Smallwood dear in their thoughts, but in their words, they’re far more practical. Us Mainlanders call the site “Joey’s Lookout,” but it’s known across the island as “The Big Giant Head.”