THEN: (Rapides Des Joachims) Back in the first quarter of the last century, there were several adventurous drives across Canada other than the successful ones I’ve already mentioned in this blog. One was the road trip of Percy Gomery, who left Montreal in 1920 with his wife in their car to drive home to Vancouver. His book, “A Motor Scamper ‘Cross Canada,” was published two years later and is a very funny account of their journey – you can download it in full here.

Gomery and his wife, referred to only as “the Skipper,” drove to Ottawa and then north along what is now Hwy. 17 all the way to Sault Ste.-Marie, where they then crossed into the States; there were still no roads in Canada that would take them to Winnipeg. 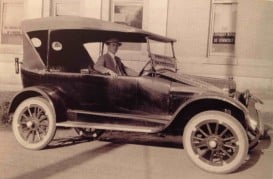 They stayed a night across the Ottawa River from where I am now, and Gommery’s account is memorable:

“Beyond Chalk River we entered wooded roads, sometimes abominable and again over a pillow of pine needles, soft and silent as a billiard table. After passing a store and a few farms we began to realize that we were in a roadless country, practically uninhabited. As a matter of fact our course went eighty or ninety miles without a gasoline supply of any sort, and one hundred and fifty miles without a garage.

“Progress became retarded. About seven o’clock, after five or ten miles in a dense, silent forest, we emerged all in a moment on a bridge under which  the brown, turbulent waters of the Ottawa surged in the Rapides des Joachims. The village of that name was just around the corner…

“A blind man would have known that the hotel was bail, if his nose and ears were doing business, but we were the sort of people who have to eat the whole egg to know that it is old. The obvious course was to use our excellent camping equipment, but – sigh outwardly! – at the end of a nerve-and-liver-racking day, stitched in unescapably by strange, unfriendly hills, and no alternative tenting ground than a foreign-speaking village, into which a stream of loutish lumberjacks is moving for the Saturday night spree – why! We were nervous about it, that’s all…

“So we passed through a double line of degenerate looking half-breeds, the target of their muddy eyes, to our room. ‘Room!’ The upper portion of the building was merely an unfinished, dirty loft, unlighted and quite unfurnished, except for one or two shake downs on which a weary logger could throw his blankets.”

Gomery goes on to describe a failed attempt at dinner, before explaining that “our wooing of the god Morpheus was an amateur effort of the rankest kind, compared to the wooing of the god Bacchus by the lords of the forest in the bar-room just beneath those creaking boards. I must admit that the occasional concerted rendering of one of the old French-Canadian chansons lent a picturesque air, but these were outnumbered, and out-hollered, by strictly up-to-date and strictly unprintable songs of the rivermen.

“I cannot say that the night hung heavily, because nothing is more enlivening than a series of fights which you hear, but cannot see, and the frequent smashing of bottles proved at least that interest was not flagging. About two o’clock Sunday morning the revelers went their noisy, uncertain way…”

The rapids no longer exist – they were dammed when Canada’s first nuclear reactor was built here at Rolphton, in 1962, the year that the Trans-Canada Highway was opened. 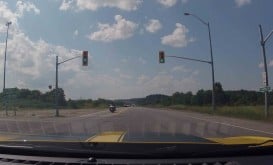 Traffic lights on the TCH at Renfrew

NOW: (Renfrew)  The road south of Renfrew is mostly twinned four-lane, as fast and as safe as you can find in Canada. And if you drive west on the TCH from Antigonish, Nova Scotia, this is the first point on the highway – after 1,540 kilometres – that you’ll find a traffic light.

The road is widening and being improved. Perhaps one day it will be possible to drive across Canada without ever having to stop for anything except fuel. After all, it’s been less than 70 years since motorists were even able to drive across the country, let alone on good roads. All it takes now is money …

SOMETHING DIFFERENT … (Pembroke) My twitter followers will remember regular @WheelsMark tweets from Newfoundland cursing the cold temperatures on the Rock – it was only 2 degrees in Twillingate and rarely hit double figures. I changed my rule then, which had decreed the top will always be down on the Camaro unless it’s raining, to allow me to close it when the temperature dropped into single digits.

After today, I’m thinking of adjusting that rule to allow me to close it when the temperature goes above 38 degrees. That’s 100 degrees Fahrenheit in the old measure, and plenty hot enough in an open convertible.