Day 29 - Disappearing industry beside the Trans-Canada, and Elliot Lake 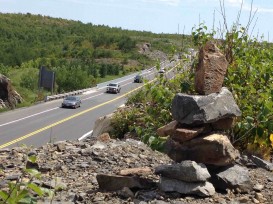 NOW: (Sudbury) The Trans-Canada Highway used to run right through downtown Sudbury, but a major bypass was completed in 1995 to keep heavy traffic away to the south.

It cuts – literally – through the rocks of Daisy Lake Uplands Provincial Park, and there are cars parked on the hard shoulders where their drivers find easy access into the park. Tristan and I paused at a safe spot and climbed up onto a rock cut above the highway.

We built an inukshuk there, like many others before us. It just seemed like the right thing to do.

Later in the day, we took a side trip to Elliot Lake to find ice cream. The Dairy Queen is behind the mall, and we paused to look at the makeshift memorial and flowers left for the victims of the collapsed shopping centre.

This is a reminder, I told Tristan, that it’s important to live life to the fullest – as every day could be your last. You never know when your final day will come. If there’s just one lesson I want to teach him, it would be that. 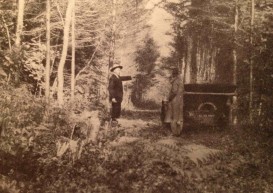 THEN: (Cutler, Ont.) In 1912, Thomas Wilby and Jack Haney were meeting problem upon problem in trying to drive across the province, let alone across the whole country.

They twisted the driveshaft of their REO car twice in two days, pulling it from sand on hills south of North Bay. The second time it happened, they limped into the next town and Haney, the driver and mechanic, found tools to straighten it. But when they made it to North Bay, in a time without highway maps, they learned there was not yet any road going through to Sudbury and they finally gave up. For the first time, they took the car off the road and put it on a train. The two followed separately, on different trains, taking a welcome break from each other.

It would be the start of many kilometres of non-road travel for the car. After meeting up the next day in Sudbury, the two pathfinders drove south toward the lake but found another lack of roads at Cutler, where Haney wrote that they had “great sport” putting the REO on a tugboat that linked the towns of Lake Huron’s North Channel above Manitoulin Island, shipping it here to Blind River. 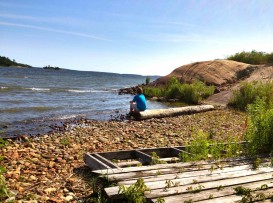 The site of the old dock at Cutler

There’s no trace any more of the dock at Cutler, which is part of the Serpent River First Nation. I met Bill McLeod at his house near the water and he told me that local transport shipping ended in the 1950s when the Trans-Canada linked the shoreline’s communities by land. The water is difficult to navigate, anyway – too many deadhead logs lying just under the surface. But he told me where the dock had been, and how to find it.

Tristan and I drove over to the old site, near a public park and the band’s war memorial. We skipped rocks for a while; nothing whatsoever remained to suggest that less than a hundred years ago, mighty boats once docked there and the place bustled with industry. Nothing whatsoever. 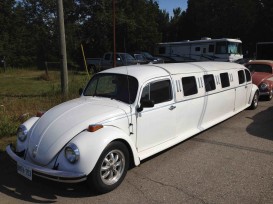 Not just any limo

SOMETHING DIFFERENT … (Sturgeon Falls, Ont.) Oscar Parent says he gets at least a couple of dozen carloads of people stopping every day to look at his stretched 1968 Volkswagen Beetle. “On Sundays, the parking lot is full, full, full,” he adds. “It doesn’t sell a lot of cars, but it sure attracts attention.”

It’s parked out front at his auto sales lot beside the Trans-Canada, which he started after moving up here six years ago to retire. But he’s too busy to retire, which is why he doesn’t drive the car anymore. “I don’t want to use up my weekends with weddings anymore – I had too many years of that.”

Oscar was a high school auto mechanics teacher in Hamilton when he saw Paul Newman drive up to the Oscars in a stretched Beetle, and he knew he had to build a car just like it. That was about 15 years ago he thinks, pausing a long time to remember. Originally, he built three, but the other two were shorter and he sold them and doesn’t know their fate. 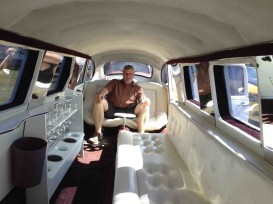 A casino from Las Vegas wanted to buy the Beetle limo but at the time it wasn’t for sale and he turned the offer down. Now, though, he’d just as soon sell it and figures it’s worth $40,000 with its new souped-up engine. His son drove it last week to his prom and had lots of space for his friends – it seats 10 in the back.

“He’s going to college and wants to join the OPP,” says Parent. Hopefully, the future officer will never have to write a ticket against the future driver of his prom night Beetle.

SOMETHING FROM TRISTAN, 12: (Sudbury) Today was nerve-racking for me because I had my first interview with a TV show (two different shows, actually). We went to the CAA office at Sudbury so that my dad could meet up with the TV guys for his interview – little did I know that I was going to be interviewed as well. 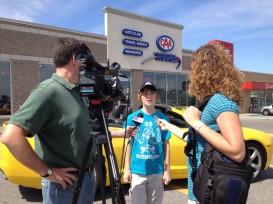 First it was the guys from the local Sudbury news, so I thought that I’d only be the laughing stock in Sudbury. Then the lady from CTV interviewed me, so I thought the whole province would be against me. But once they started to ask me questions, I didn’t feel so nervous. They asked what I was most looking forward to and I told them I want to see Alberta. They asked me if I was worried about anything, and I told them about listening to my dad’s iPod and his bad taste in music.

Afterwards, we had to film like a BILLION takes of me and my dad driving up and down this side street behind the strip mall at which it took place. But eventually they got what they needed and we were off again.

Tonight we are staying at a very nice motel in Blind River. Tomorrow we head for Wawa!