NOW:  (Batchawana Bay, Ont.) The halfway point of the Trans-Canada Highway is officially here, about 50 kilometres north of Sault Ste.-Marie. Tristan and I swung the Camaro into the picnic area that marks the point beside the Chippewa River, and we shot a video to commemorate the occasion. Now we’re staying at a motel just to the north, but the advertised wifi is so slow that I can’t upload the video. Check back here – I’ll put it up over the weekend. 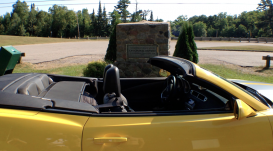 At the halfway point

I’m not so sure that this is still the halfway point, though. When Walter Stewart crossed the country on the Trans-Canada in 1965, he wrote that the road was 7,714 kilometres long. When I asked the federal Department of Transportation for the highway’s official length, I was told that it’s “about 8,000 kilometres,” which I think they just took from Wikipedia. But I’ve been keeping a pretty careful eye on distances, and if my current reading of 3,481 kilometres is accurate, then this point is well short.

The truth is the highway is evolving, being straightened and smoothed and bypassing cities. Perhaps the Trans-Canada just isn’t as long as it used to be, or perhaps my distance logs are hopelessly flawed. It’s difficult to believe, after all, that the Trans-Canada is a thousand kilometres shorter than it once was. I guess I’ll know better once I get to Mile One in Victoria.

THEN: (Sault Ste.-Marie) This was the final stop for both Wilby and Haney in 1912, and Dr. Perry Doolittle in 1925, before giving up on the road across Canada for a while. There was just no road north of Sault Ste.-Marie that led around Lake Superior, though construction was pressing ahead in ’25 and Doolittle drove a few kilometres to the end of the road before turning back for the Soo. 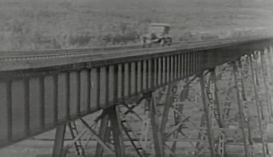 Riding the rails north of the Soo

In 1912, Wilby and Haney loaded their REO onto a schooner across the lake for Fort William, now part of Thunder Bay; in 1925, Doolittle swapped the wheels on his Model-T Ford for metal train wheels and took to the railroad tracks, registered as a special train to coordinate with the regular locomotives.

I’ll be attaching an excerpt from the 1925 movie of the drive north on the tracks, but I can’t do it today – the wifi is too slow here to upload movies. Check back here over the weekend, but in the meantime, here’s a movie already up of the Model-T practising for the train tracks at Quebec City.

SOMETHING DIFFERENT …  (Bruce Mines) The Simpson copper mine shaft only operated for one year, from 1846-1847, but that didn’t deter the small town of Bruce Mines from opening it to the public. 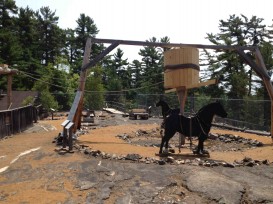 The old Simpson copper mine

The problem is that the public doesn’t know.

“You’re the first tour we’ve given today, and we didn’t have anybody yesterday,” said Jenna Thompson, a university student from the town hired as a guide for the summer. “Lots of people tell us we should have better signs. Tops, we have maybe four tours a day.”

It’s an interesting and well-informed tour, though the shaft is more of a four-metre-deep trench than a traditional mine. On the second week of this drive from St. John’s, I stopped at a coal mine outside Springhill, Nova Scotia, and there I walked with a guide for a hundred metres or so into the wet ground. When he shut the door and turned out the lights, the blackness was absolute, darker than anything I’ve ever experienced. After just a few minutes in such darkness, people become disoriented, dizzy, nauseous and fall to the floor. It was astonishing.

But the copper mine here was still a worthwhile visit, down into the coolness of the rock. It was opened for tours in 1992 but closed the last couple of years; this is the first summer it’s reopened. Take a look at its Facebook page if you want to know a bit more (though it’s still being built), or stop in next time you drive through town – if you can see the signs to find it. 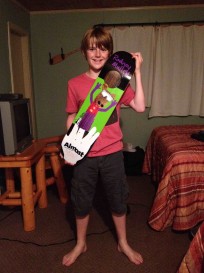 The start of a fancy board

SOMETHING FROM TRISTAN, 12: (Sault Ste.-Marie ) Today I reached the first step of my goal for this journey. My plan is to visit various skateboard shops across the country and construct my first completely custom skateboard.

I started off today by purchasing a skateboard deck at the West 49 in Sault Ste.-Marie. It is made by the company Almost, and is the Rodney Mullen version – he’s a famous skateboarder.

It is lightweight, durable, and almost (that is an unintentional pun) the same dimensions as my old board, so it will be easy to get used to. I can’t wait for the whole thing to be done!