Day 8 on the Trans-Canada, Charlottetown, PEI 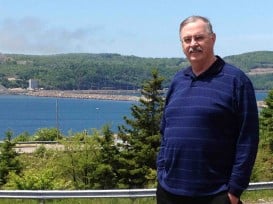 THEN: The causeway that links Cape Breton to the rest of mainland Canada is only a few years older than the Trans-Canada Highway, opened officially in August of 1955. Kevin MacDonald remembers being there as an 11-year-old boy, while his mom sold hot dogs to the crowd and his father, a train-ferry engineer at nearby Port Hawkesbury, worried about losing his job.

“I remember the bagpipes,” he recalls. “They were loud!”

Perhaps not quite as loud as they might have been, though. There’s a story, which nobody can prove true or false, that says one of the 100 pipers who marched across the Canso Causeway that day refused to actually blow into his pipes – a protest against the perceived loss of his island’s independence. He was, apparently, a proud Cape Bretoner named Roderick (Big Rod the Piper) MacPherson, and some people say it’s true and others state it’s a misty-eyed fantasy.

Whatever the case, it is true that several hundred people lost their jobs when the  causeway was completed and the ferry service ended, including Kevin’s dad, but Charles MacDonald’s position at CN was transferred instead to Sydney the following year. Kevin says he and his  sister received a better education for it. And in the end, the towns of Port Hawkesbury and Port Hastings saw more industry come to their area for the improved connection, and more jobs. 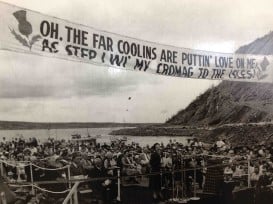 The opening of the Canso Causeway, 1955

Does Kevin have a favourite memory of that August day, 57 years ago? Sure he does.

“The Premier responsible for the causeway, Angus L. MacDonald, had died the year before and so his brother gave a speech for him. His brother was Father Stanley, and he spoke in the traditional Gaelic to the crowd who all understood the language. And he gave them his opinion of what he really thought of the politicians. The people all laughed and cheered and so the politicians, who were sitting behind Father Stanley, all laughed and cheered too. They weren’t from Cape Breton and couldn’t understand anything he was saying – just as well too. And that’s a true story. There’s lots of verification for that one.”

NOW: Peter the truck driver parked his haul of gravel among a dozen other gravel trucks in the line to enter the PEI ferry at Pictou, Nova Scotia. “We haul gravel and sand onto the island, and we’re taking contaminated soil out,” he says. There’s really no sand and gravel on Prince Edward Island that’s good enough quality to build roads or mix concrete, and it must all be imported from quarries in Nova Scotia. But the contaminated soil – what’s that about? 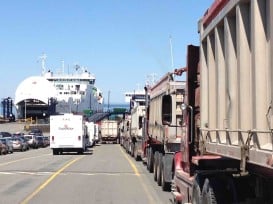 Peter is one of the drivers who take the oily soil to a landfill in Nova Scotia that can process it properly, and their trucks fill the lower level of the ferry. It’s expensive to cross, he says – nearly $130 round trip. Vehicles driving to and from PEI only pay when they leave the island, not when they enter, and it’s more expensive to use the seasonal ferry than the Confederation Bridge – about $20 more. Because of that, people in the know who need to make a round-trip loop will leave the island on the bridge and return on the ferry.

Like the ferries to Newfoundland, and the BC ferries between Vancouver’s Horseshoe Bay and Nanaimo on Vancouver Island, the 22 km-crossing of the PEI ferry is considered to be a part of the Trans-Canada Highway. There’s been a ferry here since 1937, 20 years after the first regular ferry to the island was established near the current site of the Confederation Bridge.

Today, maybe half the 100-or-so passengers are watching Ellen Degeneres on the small ship’s large TV. Reception is better than when two friends of mine crossed on their honeymoon to the island, on the morning of Sept. 11,  2001. It was horrible, Simon told me later. Everyone knew something terrible had happened but they really couldn’t make it out properly on the news with the snowy reception. When they got to PEI, he said, people heard on their car radios as they disembarked that New York’s Twin Towers had been destroyed, and everybody seemed to drive away in shock.

SOMETHING INTERESTING… They didn’t have Camaros in the 1890s – not even the originals. For that matter, they didn’t have Jeannie Campbell either, but they did have the character she plays, Mrs. Clarke of the general store. Jeannie is an interpreter at the Orwell Corner Historic Village, just off the Trans-Canada Highway about 30 km east of Charlottetown. 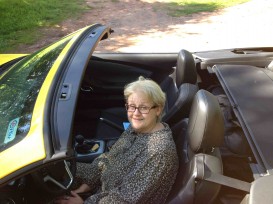 Jeannie Campbell - or is that Mrs. Clarke? - gets comfy in the Camaro

Jeannie took the time at the end of her day today to check out the 2012 car and decided she liked it, though she’s going to keep her Honda Civic for now. She says she likes her job, too, and the people she meets every summer, and she’s no stranger to having her photo taken.

“We get a lot of Japanese visitors here,” she said. They come to see Anne of Green Gables and then they come here, too. “They like this place because it’s the same time period (as Anne), and it’s real, too. These are the original buildings from the 1890s.

“They all want to take my picture, and I tell them they can take as many as they want, but I don’t ever want to see them.”