Day 9 on the Trans-Canada, Charlottetown, PEI

Quebec and all the eastern provinces were reluctant to agree, however, because they would have to spend money to improve existing roads they already considered good enough – with the exception of Prince Edward Island. PEI was pleased to sign right away on the dotted line. It wanted a bridge or a tunnel to connect it to the mainland, and it saw this co-operation as only beneficial toward that.

Of course, it also had by far the least amount of highway to construct: just 120 kilometres between the New Brunswick ferry at Borden and the Nova Scotia ferry at Wood Islands. Its relative costs were higher, though, since all gravel for the base had to be imported from Nova Scotia. 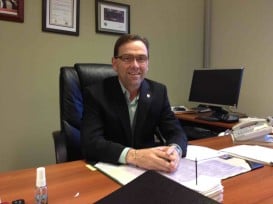 NOW: PEI’s transport minister runs his finger along a smooth line on the map. “This is the new route the highway will be taking,” says Robert Vessey. He doesn’t need to waggle his finger along the other line, which twists sharply on the paper and is the current position of the road.

At Churchill, it needs realignment, he explains. People don’t like change, especially here on the Island, and there have been numerous public meetings to determine the new route that the Trans-Canada Highway should take in this area. It has to be done, though – there’s a higher accident rate on this stretch than anywhere else on the highway, thanks to the relatively tight turns and steep grades.

“We’re trying to avoid expropriation (of private land),” says Vessey. “We’re dealing with all the landowners and so far, we don’t have all the deals done, but we’re close.  We’re negotiating–some are tougher than others, but so far, we haven’t expropriated any land.”

The existing road surface needed to be replaced anyway, thanks to the significantly increased heavy truck traffic from when it was first constructed in 1952. That would have cost the province $9 million. But if the Trans-Canada Highway is reconstructed, rather than just maintained, then the 1949 agreement still holds true and Ottawa will pay for half. The 6.1 kilometres of new road is estimated to cost $16 million, which means PEI need pay only half that, saving the province a million dollars and providing a safer highway, too. 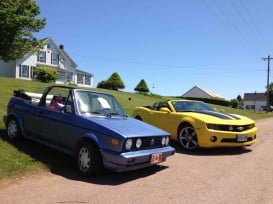 Two peas in a pod?

SOMETHING DIFFERENT:  This 1989 Volkswagen Golf Cabriolet is “ a good little car,” says owner Scott Dawson, but he’s bought a newer model, a 2001, so it’s not needed anymore. If you’re not sure with the photo, the VW is the car on the left…

“It’s not a car I’ll let my children drive,” he says. “They’ll get somewhere and then some little hiccup will happen with it and it won’t start and I’ll have to go get them and fix it. I’m always driving my kids to sports, so I said I might as well drive something fun. I didn’t buy it for the roof – I only drive it with the top down.”