THEN: I’m a hundred kilometres from the Trans-Canada Highway, on the Atlantic coast here at Halifax. When the TCH was first proposed in 1949 – when the federal government sought to encourage each of the provincial governments to build the highway, since roads are a provincial responsibility – both Nova Scotia and New Brunswick insisted on the route going through their major urban centres; Nova Scotia wanted to include Halifax, and New Brunswick wanted to include Saint John. Neither city was really “on the way” though; each was a detour, and the Act that passed in 1949 specified that the Trans-Canada would follow “the shortest practicable route.” Ottawa did have some say in the matter, since it was agreeing to cover half the cost of construction and didn’t want to pay for unnecessary additional distance.

New Brunswick finally agreed the following year on a route that bypassed Saint John. Nova Scotia held out for two more years until 1952, when in return for skipping Halifax, as Daniel Francis observes in his book “A Road for Canada,” Ottawa agreed to construct the Canso Causeway that linked Cape Breton to the rest of the province.

The lighthouse at Peggy's Cove, in need of some paint

NOW: I took a side trip today to drive past Peggy’s Cove and look at the lighthouse, which is in serious need of a coat of paint. Just like the Trans-Canada Highway, neither the provincial government nor the federal government can agree on who’s going to pay for this, so it stays unpainted, presenting a shabby front to the half-million tourists who visit each year.

It was a bittersweet day, though: it’s Father’s Day, and my two boys are at home in Cobourg, Ontario, and I should be with them. This is the first father’s day since my eldest was born 15 years ago that I’ve been apart from them.

I’ve travelled a fair bit with both boys, on road trips. My eldest, Andrew, came with me to New York on my Harley when he was 11, and again when he was 12 to Washington, D.C., when we rode there to meet the President. He now prefers to spend time with his friends, but in honour of Father’s Day, he created a Camaro with Minecraft that he sent to me on Facebook. He called me to explain how to look for it – after all, this is all from an entirely different generation.

His brother, Tristan, cut his teeth with me on the bike on a road trip to Mount Washington a couple of years ago, and this year, at 12, will be driving with me in the Camaro out west. I’ll be back to Ontario in time for Canada Day, then Tristan and I will travel together for the rest of this journey. Both of us are really looking forward to this. He sent me a photo today that popped up on my phone, wishing me a happy Fathers’ Day. 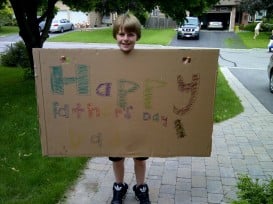 Before I left my motel room this morning–a clean room that smelled so strongly of paint that I had to leave all the windows wide open all night long–I read Ian Brown’s words in the Globe, and they rang home across the distance that I’m separated from my own boys.

“Your father stands apart, watching, the one who shows you how life works, who provides context – your instructor, your guide, your tracker, your friend … and finally your companion.”

Road trips are great, but like everything in life, they come with a cost, especially on Father’s Day. 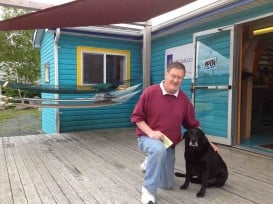 WHAT’S INTERESTING … Archie Chisholm says he’s the only professional hammock maker in the region, and probably the country. He used to work on the line for Ford in St. Thomas, Ontario, but he and Anne retired out here a few years ago to find a more satisfying life.

Now they own The Bay Hammock Company, which I drove past this afternoon on the Peggy’s Cove road and swerved into to check the merchandise. And I wasn’t the only one: “Father’s Day for us is like Christmas Day,” says Archie. “We’ll sell a couple of dozen hammocks today.”

He invited me to lie in one of his creations and as soon as I settled in, I knew I couldn’t leave without parting with $150 to take one home. I didn’t even bother to haggle – I was too comfortable. “And this one is good for the environment,” Archie joked. “The rope is ‘reprieve,’ made out of recycled plastic bags.” 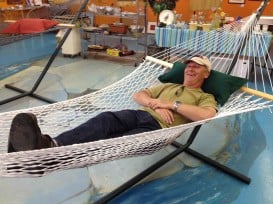 Too comfortable to drive anywhere

Archie and Anne sold their nearby waterfront home earlier this year and have just moved into an RV that’s parked alongside the hammock construction workshop, where they spin the rope and prepare the wood spreader bars. Once the season is over, they’ll be driving that RV down south and are looking forward to the journey. They’ve already started keeping a blog about it, which you can read here. “It’ll be a big road trip, yes it will,” says Archie. “You can’t beat a road trip. We’re really looking forward to it.”