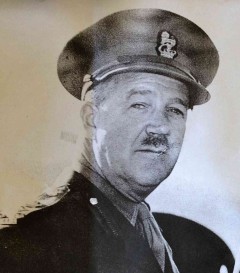 THEN: In 1946, Brig. R. A. (Alex) Macfarlane (rtd.) and his friend Ken MacGillivray, a former RCAF squadron leader, drove their new Chevrolet Stylemaster, borrowed from General Motors, to Louisburg, N.S. and dipped its wheels in the Atlantic there. Then they set off for the Pacific to become the first drivers to cross the country entirely on Canadian roads.

By doing so, they were awarded the Todd Medal, struck in 1912 by Albert Todd, who would later become mayor of Victoria, B.C. The medal was created to promote automobile use and adventure, and to encourage the connection of Canadian communities to each other by road, instead of just to their markets in the U.S. 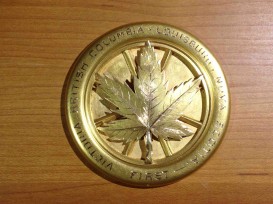 Back in 1912, Todd expected that his gold medal would be awarded within five years or so, but it took until 1943 for the final stretch of gravel highway to be completed between Geraldton and Hearst in northern Ontario before it was possible to drive across Canada by road. Even then it was an ordeal, made more difficult by wartime gas rationing, and it took another three years before Macfarlane learned of the medal’s existence and set out on his epic drive. 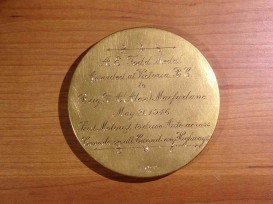 In the end, it took just 13 days to make the drive from Louisburg, then the most easterly point in Canada (Newfoundland would not join confederation for another three years) to Victoria, with a day’s layover in Winnipeg.

They ran into snow in northern Ontario, and some hairpin turns in British Columbia “gave us several thrills,” reported Macfarlane. He called the road trip “grueling,” but they experienced only two flat tires on the mostly unpaved highways and averaged almost 800 kilometres a day.

The medal was awarded to Macfarlane in Victoria, but not by Todd. The mayor had died in office 18 years previously.

On its back, it names Macfarlane as “First Motorist to drive Auto Across Canada on all Canadian Highways.” MacGillivray was not mentioned because he did not drive the car and was considered only an observer. 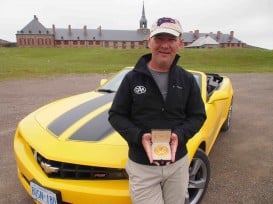 Mark Richardson with the Todd Medal at Louisburg

I have the Todd Medal with me now, carrying it securely in the car, on loan from Macfarlane’s grandson, Jim.  So today, I drove up from Baddeck on a sidetrip to Louisburg, the site of the former French fortress of the 18th century. The fortress was not restored in 1946 but no matter–because the tourist season does not begin until next week I was able to drive right up to the site and pose for a photo in front of the main building. Then I got into the  2012 Chevrolet Camaro convertible, borrowed from General Motors, and set off again for the Pacific.

NOW: I crossed on the ferry yesterday to Nova Scotia and drove down here to Baddeck, and along the way, the highway crosses the graceful Seal Island Bridge to climb up and over Kelly’s Mountain. A sign at the bottom warns that the road rises 240 metres in the next seven kilometres.

40 km/h turn on the Trans-Canada

Part of the original standard for the Trans-Canada Highway calls for drivers to always be able to see 600 feet (200 metres) ahead of their vehicle, but this is clearly not possible at the curve in the road at the northern end of the mountain, which has a recommended speed limit of 40 km/h. Forward visibility there is perhaps 100 metres. There have been numerous fatal crashes on this mountain thanks to this sharp curve.

Local lore tells that the highway could easily have crossed the water 20 km south where a ferry used to operate, which would have avoided the mountain entirely, but a local politician pressed for the current route in order to benefit from profitable land sales to the government.

The tightest turn on the Trans-Canada?

Fifty years later and the road still contains this dangerous curve, perhaps the sharpest on the highway in the country. I’ll see if there’s anything similar in British Columbia when I pass through there next month, and get back to this then.

SOMETHING DIFFERENT… I was going to just take a photo of the Lick-A-Chick restaurant that’s outside North Sydney, and mention that apparently Wayne Gretzky went in there a few years ago and bought up all the hats and T-shirts for his buddies, but a friend convinced me to post this photo instead. 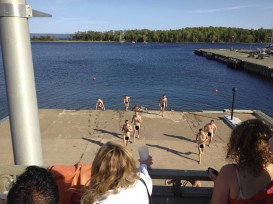 The Maine-iacs, cooling off at Baddeck

I took it here at Baddeck two weeks ago, on the way east to start this Trans-Canada Trek in Newfoundland. I’d met up with my brother-in-law and my niece who were both running in the annual 300-km Cabot Trail relay, and went with them to the wrap party that afternoon at the Bras d’Or Yacht Club.

Halfway through, the winning team – the Maine-iacs, who are perennial champions from, you guessed it, Maine – stripped off without warning and plunged into the lake to celebrate. Then, they had to get out.

There was much cheering and calling from the club’s deck. I walked after with some women from Newfoundland who were still recovering from the sight. “Seventeen naked men, all in one place!” said one. “I’ve never seen so much tackle. I wish I had a photo.”

Well, here it is. The original is available at no charge to any of the Maine-iacs who would like it, maybe to burn it….