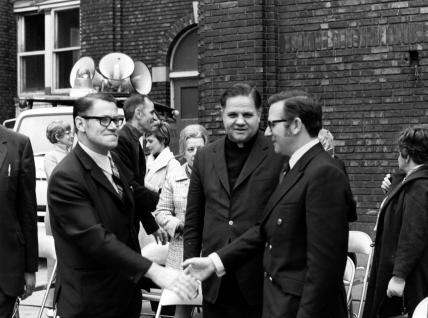 Here‘s L. Ian MacDonald in today’s Gazette on the Bouchard-Taylor commission’s recommendation to take the crucifix out of the National Assembly (and why Charest was right to reject it):

Their logic, with a view to advancing what they term “open secularism,” is impeccable. But it takes no account of, and is completely at variance with, more than two and a quarter centuries of constitutional tradition that is the foundation of Quebec and Canada itself.

And the goal of an egalitarian and secular state is by and large an admirable one, but needn’t be achieved at a cost to our constitutional heritage, the very foundation of that state.

Unfortunately for MacDonald, the specific crucifix he’s so eager to defend has nothing to do with either religious freedom or the province’s “constitutional heritage.” In fact, it represents pretty much the exact opposite. Here‘s University of Montreal historian Jacques Rouillard:

It was Maurice Duplessis’s Union nationale government that decided to put the crucifix above the speaker’s throne during the very first session of government after it was elected in October 1936. A crucifix was also installed in the red hall above the chair reserved for the speaker of Legislative Council. (The room is now used for National Assembly committee meetings and the crucifix has since been removed.)

Duplessis’s decision was no accident; it was carefully thought-out and meant to reflect the new government’s intention of changing the dynamic between the Church and the Quebec State. Duplessis wanted to distinguish himself from previous Liberal governments by showing he would be more receptive to Catholic principles.