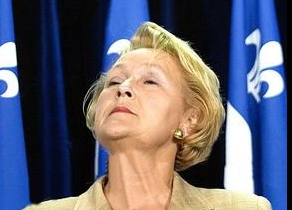 You learn something everyday. It seems that before he became a PQ MNA, François Legault co-founded Air Transat, meaning that I have him to blame for the semi-paralysis below the knees following a six-hour flight to Paris a few years ago. Memo to Legault: four inches of legroom isn’t legroom, unless one doesn’t have legs. But thanks for the cheap ticket all the same.

Legault left politics today. Bad news comes in threes, and his announcement this morning comes on the heels of two by-election losses for the party. This late-breaking collection of negative headlines has brought on the usual ‘the PQ is dying’ business–“A major blow to [Pauline] Marois,” as the Gazette put it today; expect a gleeful facewash from the paper’s editorial board tomorrow–and has lurched the party toward yet another existential crisis for which it is famous. Certainly, the loss of Legault is damaging, given his seemingly effortless ability to embarrass the bejesus out of Charest et al. And no offense to Denis Coderre, but I’ve never seen anyone gladhand his way more artfully through acres of strangers than Legault. He is the best ambassador the party has had in a long while, and his departure will no doubt smart.

But no matter how hard you throw it, bash it, strangle it or spit on it, the PQ isn’t going anywhere. Neither is Marois, for now anyway. Here’s why, bullet-pointed for your convenience:

•You can’t kill virtue The PQ will always and forever have a monopoly of virtue in Quebec. No matter how successful or savvy the Liberals may be, it will never touch the PQ when it comes to issues of language, culture or history, all of which are bread-and-butter vote getting issues on which you can run a campaign (just ask the ADQ.) It was how the PQ so effortlessly regained the Official Opposition in the last election. The PQ is, and will always be, the gut instinct when it comes to “Quebec values”, nebulous as they may be. A true Quebecer heart will always be PQ, even if he votes Liberal. It’s a confounding thing, for both parties.

•The troops are in line Legault is what they call a lucide: a right-leaning businessman who thinks Quebec is drifting towards hell (or at least bankruptcy) in a socialist handbasket. This makes him a very odd bird within his party of choice. He was largely responsible for balancing the Quebec budget for the first time in 40 years, under Lucien Bouchard. He has criticized Marois’ nanny-statism and suggested, none-too-discreetly, that Quebecers shouldn’t continue to finance social programs by indebting their children. This sort of quackery is anathema to the PQ’s left flank–the very flank, not incidentally, that is the loudest about sovereignty and referendums. With Legault gone, this flank is all the more placated and therefore less likely to complain about Marois. (Also, Marois is farther to the left than many of her predecessors.)

•There’s no one else Marois, as Marois herself has said, led the PQ out of the wilderness. This isn’t just posturing (though coming from her, it is certainly is that as well.) She unified the party, which is necessarily fractious given that it suffers from too much internal democracy, and had 51 MNAs election under her reign. She managed to shut the loudest referendum-or-die guys up for longer than anyone thought. Though she hasn’t quite endeared herself to the hoi-polloi, there is quite simply no one else in the party who could have done better, now or before. If she leaves (or is pushed out, which has been the fate of every single PQ leader save for Parizeau), who would replace her? More importantly, who would want to replace her?