Define "poverty." Seriously, do it.

Yesterday’s Toronto Star editorial notes a wonktastic OECD report, released last week, which shows both poverty and income inequality on the rise across most of the OECD, including Canada, from the mid-1980s to the mid-2000s. Inequality fell in Ireland and Turkey; poverty fell in Belgium, Denmark, Mexico, Portugal and the United States; and both fell in France, Greece and Spain. But other than that, it’s bad news, not least for Canada.

It’s confusing news, too. The Star, as per usual, pegs the number of Ontarians living in poverty at 1.3 million, which is roughly the number that fall below Statistics Canada’s after-tax low-income cut-off (LICO), a measurement of what percentage of a household’s earnings go to essentials like food, shelter and clothing. But while they tip hat to the OECD’s analysis, the Star‘s editorialists don’t use any of its stats. Cynical readers might assume that was because it low-balled the poverty numbers, but in fact it’s the opposite. The OECD defines poverty as living with less than 50 per cent of the median income, and by that measure establishes Canada’s poverty rate at 12 per cent. That’s actually slightly higher than the LICO, which is 11.4 per cent for Canada and 11.1 per cent in Ontario.

Two totally different measurements of poverty; two nearly identical results. But neither LICO nor less-than-half-the-median is an absolute measurement of poverty. They’re both relative. Give every Canadian a cheque worth 20 per cent of his annual income and the OECD poverty rate would stay exactly the same. Everyone would just move proportionally up the ladder, as would the median, and the bottom rungs would still be considered impoverished despite their newfound spending power. [UPDATE: A weak analogy, at best. What really happens is the ladder moves up to higher-income territory, and everyone stays on their rung.] And that’s fine, to a point. It seems a little odd to me that the OECD presents income inequality and poverty as if they were totally separate phenomena, when the poverty measurement is itself, in many ways, a measurement of inequality. But I realize internationally comparable figures—the lifeblood of colossi like the OECD—are few and far between.

But that’s where the OECD report gets really interesting:

Several OECD countries … have “official” measures of poverty that rely on “absolute” standards, typically in the form of the cost of a basket of goods and services required to assure minimum living conditions and indexed for price changes over time (e.g. United States). While the use of “absolute” thresholds poses difficult methodological issues for cross-country comparisons (Förster, 1994), one way to illustrate how “absolute” poverty has changed over time is to use a relative threshold in a base year which is kept unchanged in real terms in later years. One such measure, based on a threshold set at half of median income in the mid-1990s, shows that—even when relative income poverty is rising—most OECD countries achieved significant reductions in absolute poverty between the mid-1990s and mid-2000s. 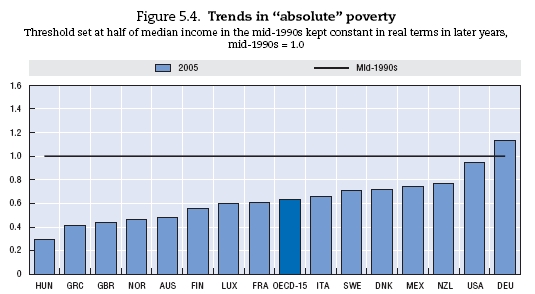 In English: when measured in some sort of absolute terms, poverty has fallen in all 15 of the OECD countries on the chart above except Germany, and it has plummeted in the nations to the left of the chart—Hungary, Greece, Great Britain, Norway and Austria. Yet of these 14 nations that cut poverty on their own terms, the OECD’s measurement has poverty increasing in seven of them.

You’d have to ask a statistician why. But from a political standpoint, to my mind, it underscores just how crucial it is for governments to establish these in-house measurements of poverty. Ireland’s “deprivation index,” for example, states that an Irishman ought to have access to basics like “two pairs of strong shoes,” a “roast dinner once a week,” and so on. If he doesn’t, and if his income is less than 60 per cent of the median, then he’s considered to be living in poverty. The Star, to its credit, suggested just such an approach coming up on two years ago. And Ontario promises to have “measures and targets” in place by the end of the year. It can’t come too soon, even if we end up with a different measurement for each province. But you’d think the feds, too, would rather point at a real target and get on with it than bicker about the ideological importance of income equality with anti-poverty activists, who can legitimately claim to have no choice but to use relative statistics like LICO. Yet even the Liberal platform, not that it’s worth much now, proposed to measure and cut poverty using the same old LICOs, when a promise to adopt an empirical approach wouldn’t have cost a dime.

I am not someone who dismisses the importance of inequality on grounds that, hey, you can either afford a loaf of bread or you can’t, and if you can, then leave the rich alone. But it’s certainly far more important that all Canadians be able to afford bread than that the richest Canadians can afford more, and fancier, baked goods than the poorest. One problem at a time, in other words. And 141 years into the history of Canadian poverty seems like as good a time as any to decide what on earth it actually means.