Did Victoria Secret's bow to pressure and remove controversial underwear?

Jessica Allen on a difference of opinion and an online debate 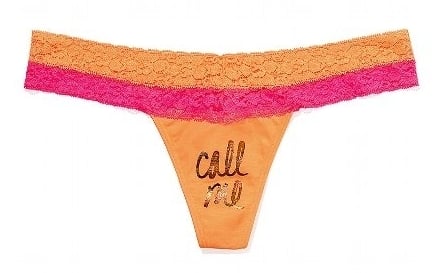 “What is sexy?” Victoria Secret asks on its Facebook page.

Little did they know that new underwear and apparel from their “PINK” line, like a lace-trimmed thong with “Call me” written across the front, might be too sexy according to those who believe that the lingerie mavens are targeting a younger audience than the college crowd they purport to market toward in their “Bright Young Things” campaign.

The difference in opinion surrounding “PINK’s” intended demographic–not to mention whether any woman really needs a pair of green-and-white polka-dot hipsters reading “Feeling Lucky?”–has sparked an online debate, from their Facebook page covered with hundreds of comments to petitions requesting that they pull their most recent campaign.

It may have worked. None of the offending underwear can be found on the company’s website. According to ABC News, “links that appear to be to the products are re-directing to the Victoria’s Secrets homepage so it is unclear if the company has removed the products. Representatives for the company did not wish to comment beyond a statement that was posted on their Facebook page insisting that ‘Bright Young Things’ was simply a slogan.”

That Facebook post said: “In response to questions we recently received, Victoria’s Secret PINK is a brand for college-aged women. Despite recent rumors, we have no plans to introduce a collection for younger women. ‘Bright Young Things’ was a slogan used in conjunction with the college spring break tradition.”

However back in January, the company’s chief financial officer Stuart Burgdoerfer alluded that the business was trying to reach a younger audience: : “When somebody’s 15 or 16 years old, what do they want to be? They want to be older, and they want to be cool like the girl in college, and that’s part of the magic of what we do at PINK,” he said at a conference.

For better or worse, the bottom line may be all about business:  “Sales of lingerie for younger women are a $1.5 billion-a-year business for Victoria’s Secret’s PINK line,” wrote Business Week last month, “which also woos girls.”