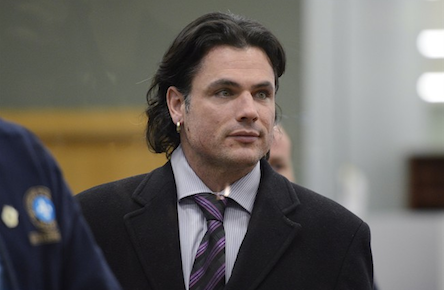 GATINEAU, Que. – A dispute over the disclosure of evidence has forced a delay in a hearing for a senator accused of assault and sexual assault.

Sen. Patrick Brazeau was not in court for Friday’s brief hearing, where his lawyers said the case against the senator is already being tried improperly in the media.

Michel Swanston said outside the courtroom he was “appalled” that details of the case have already been reported.

Last month, details of a search warrant filed in court indicated Brazeau was charged following an argument over aboriginal issues at his home in Gatineau, Que.

Brazeau has been an outspoken critic of some factions of the aboriginal movement, including the Idle No More protests.

He has pleaded not guilty to the charges against him, and will defend himself in court, said Swanston.

“We have no intention of arguing this case in the media, and are appalled by the fact that a version of facts is already circulating before the trial has commenced,” said Swanston.

“(Mr. Brazeau) is adamant to return to his functions after this situation has passed, to represent the interests of Canadian citizens before the Canadian Senate.”

Swanston and Brazeau’s other lawyer, Gerard Larocque, complained to the court that they had not yet received full disclosure of the evidence against the senator.

That left Crown Attorney Sylvain Petitclerc scratching his head, saying he believed that all of the evidence was included in documents provided to Brazeau, and that his lawyers may be trying to delay a trial.

“Everything is in that,” Petitclerc told reporters outside the courtroom.

“The police reports, the statement from the victim, so I don’t see what’s missing in that file.”

The hearing has been rescheduled for June 10.

Brazeau, 38, was arrested Feb. 7 after two 911 calls to police from his home in Gatineau, Que., across the river from Ottawa.

The arrest came a day after a Senate committee announced it had hired independent auditors to examine Brazeau’s housing expense claims and those of two other senators.

The police warrant included allegations by a woman in the home who said she was punched, choked, had her pants torn and was pushed down a flight of stairs hard enough to break a railing.

The complainant, who cannot be identified under a publication ban, also alleged Brazeau aggressively grabbed her breast and another area of her body, spit in her face, tore up a bra and blouse she was attempting to pack in a suitcase and called her vulgar names.

Shortly after his arrest, he was kicked out of the Conservative caucus by Prime Minister Stephen Harper, who had appointed Brazeau to the upper chamber in December 2008.

Brazeau was later forced by his Senate colleagues to take a leave of absence, but continues to collect his $132,000-a-year salary.

Brazeau continues to make himself visible, writing comments on Twitter as recently as Friday on issues including cancer fundraising events and Montreal Canadiens hockey games. Some Twitter users have made not-so-kind references to Brazeau’s current legal battle in response to his tweets, but he has, so far, declined to respond.