The official HMV Twitter account went way off message Thursday after a staff member used the account to live-tweet the apparent firing of a number of employees.

The tweets came with the hashtag #hmvXFactorFiring and were quickly deleted from the account, after a manager reportedly asked: “How do I shut down Twitter?”

But the Internet never forgets, and Twitter users shared screen grabs of the tweets, even after they had been removed from the HMV account.

HMV later confirmed that 190 people had, indeed, been fired: “…a number of redundancies at the head office and distribution centres have been made. Although such decisions are always difficult, it is a necessary step in restructuring the business to enhance the prospects of securing its future as a going concern,” a spokesperson told The Telegraph in a statement.

Early Thursday afternoon a new series of tweets came from the official HMV account, responding to the unexpected uproar. “One of our departing colleagues was understandably upset,” read the last of the three tweets, which thanked followers for their “continued support.” The tweets are as follows: 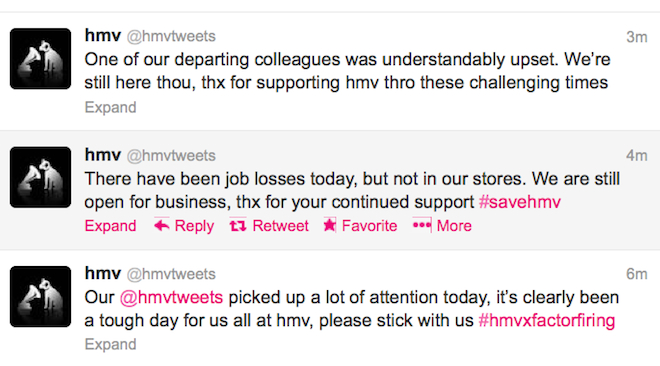