Do Wing it the Babcock way 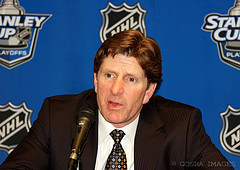 Lots of prattle about Detroit needing to come out of the gate with their fangs bared, stedda letting in two goals early like last time. Shockingly, Coach Mike says the key will be control. We need to concentrate, he says. Pay attention to detail. Do the little things right … so tired, hmm, zzzzz …wha? oh yeah. “There’s so much motivation here right now,” the lantern-jawed bench-boss adds. “Both teams are highly motivated. It’s not like you need to get them jacked up.”

Those, like me, who are perplexed by Detroit’s ability to pump in goals while boring the pants off you, will giggle. We will fall over sideways at a maxim Babcock just issued from the pulpit: “Work ethic first, structure second, skill third” is how you win as much as the Wings do, he says. Nothing about fun. But hey, who are we to argue? You wish sometimes Zetty and Datsyuk would go off the leash, but Detroit finished the year 54-21-7. They scored 252 goals, 73 more than they allowed. They’re one win away from a Cup and you can’t argue with results.

Other than this, and a few platitudes about how wonderful it is for the city of Pittsburgh that this is all happening, Babcock had little to offer. Asked whether the team has collected its wits after the Game 5 rollercoaster ride, he argued they had collected their wits by the second shift of the second period in Game 5. True enough.

NB: Now I know why they used to call this the Igloo. It’s cold as a Laplander’s kiss, which seems weird, because it’s like a steambath outside. Turns out Dan Craig, the NHL’s ice guru is working very hard to keep the surface in this 1950s-era pile useable during this week’s tropical monsoon. Evidently this requires turning the thermostat to 0 degrees Kelvin in the hours before the game. And Coyne thinks he has it bad at the B.C. Human Rights Commish …