Don't call it a "hanging"! Liveblogging the unveiling of the official Joe Clark portrait

3:41:17 PM
After spending most of the day alternately obsessing over international human rights law and bartering Bernier gossip, it seems fitting somehow to spend the next hour or so at a ceremony of utmost political propriety: the unveiling of the official portrait of the—uh, 17th Prime Minister? What number are we at, anyway? I’d Google it, but that always feels like cheating, and anyway, we know him best as just Joe.

I’m huddled at the back of the room on a camera riser—there are a few crews setting up, although so far, it’s not exactly filled to capacity here in the Reading Room. Then again, there was a vote, and I suspect the scrums might run longer than usual, what with—you know, all that stuff.

I’m going to guess that the average age in here right now is about 60, which I guess is probably appropriate, given the occasion.

3:49:30 PM
Over here in the media corner, we’re all shamelessly watching for Conservatives, and we’ve spotted a few: Ted Menzies, Michael Chong, James Moore—but so far, they almost evenly matched for turnout by Liberals. Dion is here, as is Martha Hall Findlay, and there’s Bill Casey—the one remaining Independent Conservative in the House—who is beaming from ear to ear and acting as a sort of ad hoc usher.

3:55:26 PM
Okay, now it’s starting to fill up—with a prime minster, even. Paul Martin just turned up, as did Gilles Duceppe, which is characteristically classy of that sly old Bloquiste.

I wonder if Layton will show up?

3:58:17 PM
Justin Trudeau just turned up—and there’s Elizabeth May, and Garth Turner, and I just got distracted but a few more MPs have squeezed in, including Lee Richardson, Bill Blaikie, and yeah, I should stop just listening names, but it’s hard to describe the ambiance without giving the context, which is as purely, perfectly non-partisan as it can get.

And yes, of course there is Bernier gossip—come on, this is still Ottawa.

4:12:49 PM
The welcoming party—Joe and the two Speakers (House and Senate), and Marjory LeBreton—just arrived, to wild applause, and yes, chants of “Joe, Joe, Joe!” He looks pink with pleasure, and by a trick of placement, he’s directly in my line of sight. When you’re five feet tall, that doesn’t happen very often.

4:16:33 PM
The Speaker jokes that when he was in public life, Clark much preferred it when someone else was being lauded; this time, he’s going to have to put up with being the honouree in chief.

Brief recap of the life of Joe—including a very sweet tribute to Catherine, who, Milliken says, was a guardian angel for his former staff: whatever bad news or awkward request might arise, it was always best to bring it up when she was visiting her dad, since it was then that he was at his most malleable and agreeable.

4:21:34 PM
Milliken hands the floor over to Senate Speaker Noel Kinsella, who is a little less mellifluous than Milliken (who isn’t, really) but no less heartfelt. He talks about some of Joe Clark’s achievements—not only as PM, but as foreign minister as well.

4:26:43 PM
And now, Marjory LeBreton, who is practically luminescent with nervous good cheer; she recalls that she and Joe started work at PC Headquarters the same month, back in 1962—”although we still argue about who was there first.”

More MPs and senators are sidling in to take up the few remaining standing room spots left: Ralph Goodale, Ken Epp, Karen Redman, Scott Brison, Geoff Regan—really, a good turnout, I have to think, although this is my first hangi-veiling.

4:30:00 PM
Joe appointed the first Canadian of African descent—Lincoln Alexander—and the first female cabinet ministers. “And who can forget the Vietnamese boat people?” She trills. “And no offence to you, Justin,” she adds, but he was the only person to ever get Trudeau out of office, although not for long. Justin smiles beatifically.

To conclude her remarks, she quotes from what the current Prime Minister said in the House on the occasion of his retirement. Because that’s not awkward at all. 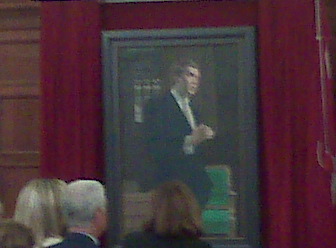 4:33:38 PM
And—good god is that the portrait? Really? It’s—I’m going to have to muse on the right word for a moment or two, but it’s actually kind of adorable. It’s a young Joe—a very, very young Joe—pictured in the House, giving some sort of speech that involves a sort of laconic hand gesture. Oh hell, I’ll just take a picture of it.

4:36:20 PM
And now, it’s finally Joe’s turn. He starts out by thanking his family, and then moves onto the party leaders in the room—Dion, Duceppe—and all his former colleagues. “And my partisans,” he adds, “whatever party they might be in at the moment.” One hell of a laugh line there.

He also makes a point of thanking Harper for his kind words for having had to miss “my hanging”—more chuckles—and assured the crowd that he understood how international affairs can take priority. The PM did invite Clark to attend his hanging, Clark notes, “although he hasn’t given me a date.”

A little background on the portrait, and the artist; an Albertan, of course.

4:40:57 PM
This is beyond adorable—his tiny granddaughter, Alexandra, is sitting on her mom’s lap in the front row, and like any three year old, she’s getting impatient, and a bit chatty. “I’m nearly finished, Alexandra,” the former PM assures her.

You know, now that I look at it, it really is a very fitting portrait.

Lessons learned: Parliament as a national institution. There was a time, he says, when he was obsessed with the procedures of Parliament—how to keep the bells ringing. Now, he’s more interested in how the country is changing, and how we need national institutions with vitality, and legitimacy. These days, the parties can’t seem to play national roles, but Parliament still can. Its roots reach everywhere.

4:48:06 PM
It’s getting seriously warm in here—I mean, temperature-wise, not just the feeling of camraderie. Joe is reminiscing about one of the “endless” constitutional conferences he had to chair during his years as minister of constitutional affairs. Respect, he says, was what was needed there, and is needed here.

In her biography—”which more of you should read,” he adds, “and more of you should buy”—Maureen wrote that she wanted to be brave. His voice choking up, he pays her that tribute; she was as brave as anyone who sat across the table at 24 Sussex Drive.

And with that, he goes back to his seat, and the Speaker takes the microphone for one last moment: he wants to tell everyone about a new pictorial guide to Canadian prime ministers, in brochure format. There will be copies outside; we can use them as a spotters’ guide at the reception next door.