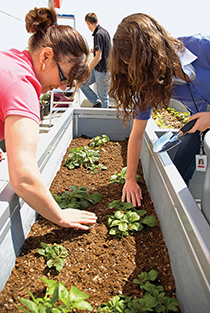 Every week, starting in midsummer, a Vancity employee packs some tomatoes, peas, carrots, squash and a few herbs onto a bicycle and delivers them to a local nutrition program in Vancouver’s Downtown Eastside. The vegetables are grown on the rooftop garden of the credit union’s head office, a project that started two years ago. “It was a volunteer effort from some employees who said, ‘You know what? We should just make this a more livable place,’ ” says Maureen Cureton, the green business manager at Vancity.

A few Saturdays of hard work later, the “sky garden” was complete. It now serves as a place where employees can hang out on sunny days, and its harvests supply non-profits that bring healthy food to marginalized communities. Vancity has been named one of this year’s “Green 30”—a list of 30 Canadian businesses whose employees are most positive about their record of environmental stewardship. Compiled by global consulting firm Aon Hewitt, the list is based on opinion surveys from more than 190,000 employees at 280 organizations across the country.

Vancity is certainly a model of environmental stewardship. It boasts a robust recycling program—82 per cent of waste from its head office was diverted from landfill in 2012—and has been carbon-neutral since 2008, encouraging employees to carpool or bike to work. It also purchases offsets that go back into B.C.-based projects such as conserving the Great Bear Rainforest.

But according to Cureton, it’s the effort to build a “green economy” that sets Vancity apart. “We’re really saying, ‘We have $17 billion worth of assets; how can we direct those to help create a vibrant local community?’ ” Vancity’s 38,000 members include recycling and composting services, organic food growers and companies focused on renewable energy. By financing these businesses, Cureton says Vancity hopes to show that being environmentally conscious is good for the bottom line.

At the Co-operators Life Insurance Co. based in Regina, there has also been an emphasis on community engagement. Last year, the insurance provider teamed up with a local credit union and committed to a two-day cleanup of the inner city. They filled two truckloads with garbage. “What was really exciting about it was we had a lot of people in the area come by and thank us for helping clean up their neighbourhood,” says Glenn Bohay, manager of corporate sustainability.

Through its Youth Engagement in Sustainability Fund, established this year, the company is offering small grants to support green programs at local schools. It has also partnered with the Saskatchewan Science Centre to promote awareness-related activities during Earth Month.

And at GEF Seniors Housing in Edmonton, which runs 34 affordable housing complexes, the focus has been on energy-efficient retrofits; many of its 3,100 units have energy-efficient lighting and triple-pane windows for better insulation, and some newer buildings are using solar-powered hot water. These changes, says executive director Raymond Swonek, save on energy and utility costs. “We’re not on the bleeding edge of technology, but we’re taking things that are very environmentally friendly and are going to work for us and give us a reasonable payback.”

With so many companies touting green policies nowadays, it can be difficult sometimes to differentiate the legitimate ones from those just jumping on the bandwagon. “It’s really hard to find a big company out there that doesn’t have some kind of environmental sustainability department,” says Keith Treffry, the director of communications and development for Earth Day Canada. “I think it’s a bit far-fetched to say that companies are doing this because they’re all altruistic, all of a sudden. But I do think that they’re starting to see that the environment and the bottom line are not mutually exclusive.”

Neil Crawford, a partner with Aon Hewitt, says that while companies increasingly see green policies as good business, they are also having to respond to employees and future hires who are “raising their expectations about employer practices in the social and environmental areas.”

While making small changes, such as reducing paper waste, are a good first step for many businesses, there is a lot more that can be done, says Treffry. He points to Wal-Mart, which requires its suppliers to adhere to its environmental guidelines, as a good example. Ultimately, it will be up to consumers to do their research on companies’ green claims. “We are living in a much more consumer-savvy world now,” says Treffry, “which means we’re able to hold companies accountable in ways we haven’t been able to do before.”