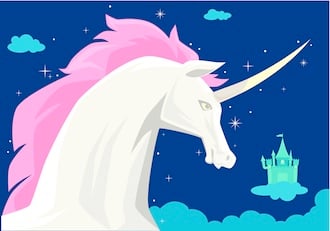 Unicorns exist! Or at least they did at one time, according to a report from North Korea’s Central News Agency.

“Archaeologists of the History Institute of the DPRK Academy of Social Sciences have recently reconfirmed a lair of the unicorn rode by King Tongmyong, founder of the Koguryo Kingdom (B.C. 277-A.D. 668),” says the report.

So, not only have archaeologists confirmed the unicorn lair, they have actually reconfirmed something they, and every four-year-old girl, already knows. Unicorns are real.

“Korea’s history books deal with the unicorn, considered to be ridden by King Tongmyong, and its lair,” director of the History Institute, Jo Hui Sung, is quoted as saying.

To give North Korea a little credit, the news agency just says that they have reconfirmed the lair of the unicorn, and not the unicorn itself. Finding a unicorn would just be crazy, but finding its living quarters helps prove that North Korea’s version of history is factual.

Or maybe something got lost in translation.

Meanwhile, The National Post is quoting a U.S. study that says Bigfoot exists and is the result of a woman mating with an “unknown hominin.”

Watch for forthcoming evidence on the Loch Ness monster and the yeti in coming weeks.