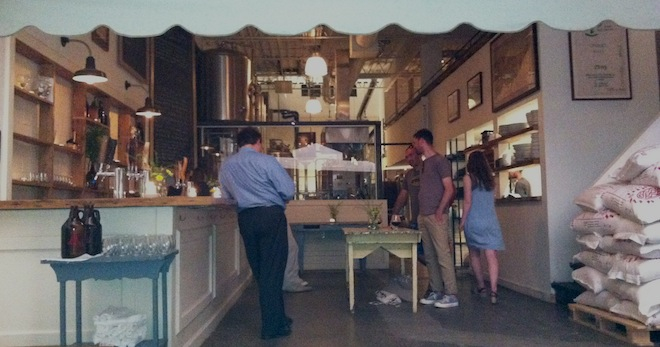 Beer aficionados cooled off on Monday night–one of  hottest days of the year so far–at Bellwoods, a brewery housed in an old auto garage that opened up on Ossington Ave. in Toronto. The occasion? “The mother of all collaborations,” says the Bellwoods website, with Evil Twin Brewery, whose beers are coveted by microbrewery nerds the world over.

Evil Twin is the mastermind of brewmaster Jeppe Jarnit—Bjergsø. He’s Danish. Once he came up with a beer after changing his son’s diaper–there were hints of vanilla. It’s called Soft Doofie, or Soft DK. There is actually no Evil Twin brewery, making Jarnit—Bjergsø a bit of a gypsy. He currently brews beers, of which there are about 20, everywhere from South Carolina and Scotland to Holland. And now, in Toronto.

Guests paid $25 for a glass of the collaborator’s finished product: “a pale ale brewed with aromatic hop varieties from New Zealand, apricots and mango to compliment the heat of summer, and finished at a solid 6.8% ABV.” They were also treated to food prepared by Daniel Burns, “The best Canadian chef you’ve never heard of,” according to a fantastic profile in the Globe and Mail by Chris Nuttall-Smith. The Halifax-raised 37-year-old chef worked at Noma in Copehagen for three years, not before finishing degrees in mathematics and philosophy at Dalhousie. Burns also worked at the Fat Duck in England and at Susur back in 2003. And he was the head of research and development at Momofuku. Back in February, he said he was hoping to open up his own restaurant but he couldn’t confirm where in the world it would be. While Burns was preparing little crostini topped with a cabbage and cucumber slaw in a horseradish dressing topped with a slice of grilled veal heart, I asked him if any decisions had been made. “My plan is to move to Denmark and open up a place there,” he said. “I like Europe a lot.” 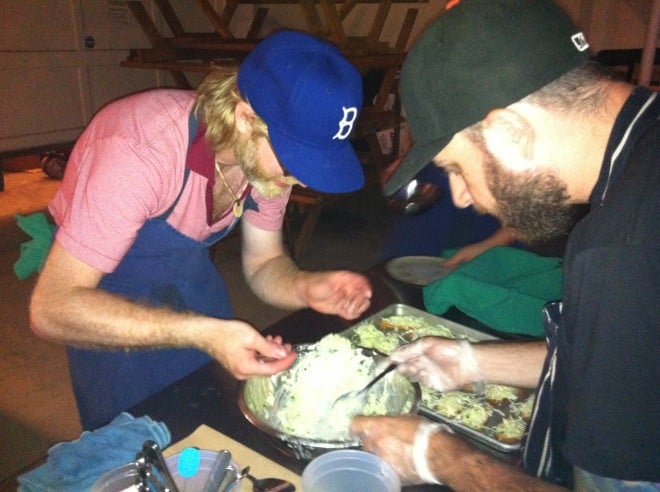 Burns’ main dish was thinly sliced pork loin in an Asian-style barbecue sauce and crushed potatoes with radish and daikon in a fish sauce. 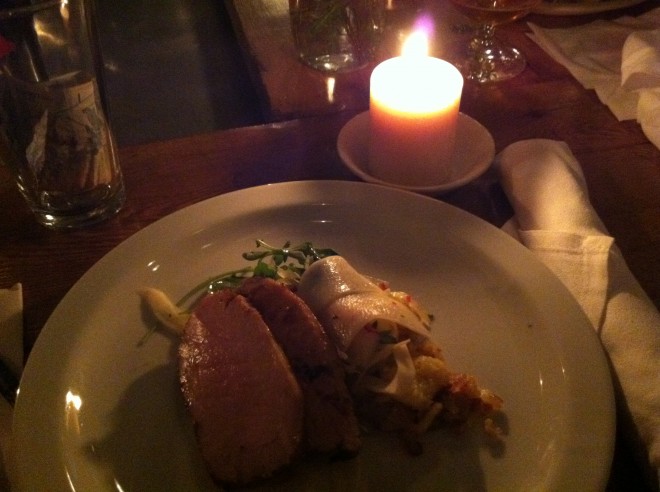 Luke Pestl and Mike Clark, former brewers at Amsterdam Brewery, are the duo behind Bellwoods, which has turned out to be an incredibly popular destination since opening in April.  “It’s dramatically better than we expected,” confessed Clark, “and we’re really happy with how we’ve been received by the beer community–the beer snobs.” Pestl dropped out of school just before completing a Masters in Chemical Engineering and Clark spent three years in a row missing medical school by one spot on the waiting list. But Pestl’s mother, Lauma Stikutz, who was present at the event, said “It hasn’t all completely gone to waist.” She was really happy when she saw her son’s chemistry books upstairs at the brewery. Her favourite Bellwoods brew is the Witchshark–a hoppy IPA with a booming 9% ABV, but she’s especially proud of the Lost River Baltic Porter, not just because it won a gold medal at this year’s Canadian Brewing Awards, but also because it’s named after her birthplace.

So, how did Bellwoods, Evil Twin and Burns all come together? Turns out Jarnit—Bjergsø met Burns in Brooklyn, where they both live, and where they met chef Guy Rawlings, Bellwoods’ menu consultant, and Pestl’s friend since childhood. One thing led to another and a beer was born.

But it turns out that Jarnit—Bjergsø wasn’t just in town to launch the apricot pale ale at Bellwoods. When I pressed him for more, he said, “It’s a secret project. The beer [I’m working on] tomorrow is really why I’m here.”

If you connect all the restaurant dots, a few possibilities come to mind. Stay tuned.