The world is learning more about the soldier who was the victim of a horrific knife attack in London Wednesday, as family members spoke about Lee Rigby, a military drummer, who was just 25 years of age.

Rigby was married and had a two-year-old son Jack, whom he was looking forward to spending the weekend with, his wife Rebecca told reporters Friday. “I love Lee and always will. I am proud to be his wife and he was due to come up this weekend so we could continue our future together as a family,” she said. “He was a devoted father to our son Jack and we will both miss him terribly.” 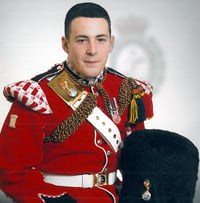 Rigby was a drummer with the Royal Fusiliers regiment had served in Cyprus and Afghanistan. His wife and stepfather expressed disbelief that he would die on the streets of London, just steps outside the army base where he was posted.

As the family gave a tearful press conference Friday, elsewhere, the second suspect in the attack against Rigby was named as Michael Adebowale, 22, according to a report in The Wall Street Journal.

The other suspect involved in the attack, in which onlookers watched two men hit Rigby with a car outside the Woolwich army barracks in southeast London and then stab him, was identified the day before as Michael Olumide Adebolajo, 28.

Video taken by onlookers shows one of the men justifying the attack as Rigby lay on the ground, saying it was retribution for the crimes enacted upon Muslims by the British military.

Both of the suspects allegedly involved in the attack were gunned down by police and remain in hospital under police guard. They remain too badly injured to speak to police at this time, reports The Guardian.

Both men who have been identified are British citizens of Nigerian descent, reports say.

In total, four people have been arrested by police during their investigation into the attack: three men, aged 29, 22 and 28, and a 29-year-old woman.