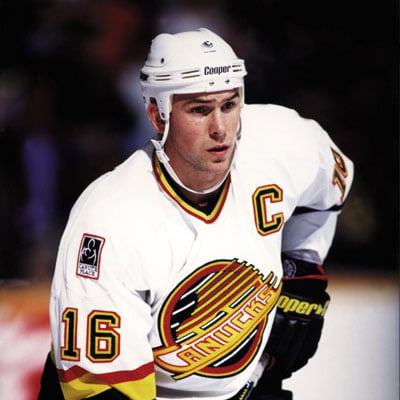 Today’s Vancouver Sun has a special, 32 page insert devoted to Trevor Linden, whose #16 is being retired tonight at GM Place.

Inside, are fond farewells from premier Gordon Campbell, who declared today, Trevor Linden Day in B.C., NDP leader Carole James, whose son built a living room shrine to the Canuck captain, when in 1994, with cracked ribs and torn rib cartilage, he helped to drive the team within an overtime, Game-7 goal-post of the Stanley Cup (he also scored both Vancouver goals in New York that night). Also included are tributes from the NBA’s Steve Nash, former mayors, sports scribes and countless other fans — including at least two who named their sons after him.

And this pic of Linden, aged 18. Dressed in a Canadian tux — jeans and jean-jacket — he’s leaning on his 1965 cherry-red Mustang in the Pacific Coliseum parking lot at the start of his 30-goal rookie season with the Canucks (1988-89), then a sad-sack franchise.

During his playing days in Vancouver, the much-loved Canuck, known for his humility and compassion, took time out to visit local hospitals and hospices, at least once overnighted at a summer camp for kids with cancer, and took a lucky few to lunch and the driving range.

“All heart. All class. All Canuck,” writes Lennea Perpet.